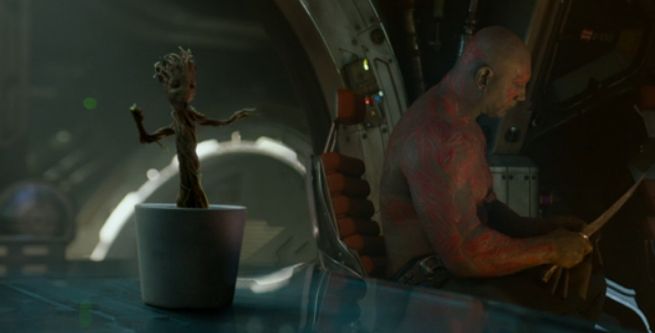 The popular scene already had fans demanding dancing Baby Groot toys, but Guardians of the Galaxy's Michael Rooker might have taken it one step further. As previously reported by Comicbook.com, Rooker recreated the Baby Groot dance while standing in a trashcan behind Dave Bautista at the Wizard World Chicago Comic-Con.

The video has quickly gone viral, and the term "grooting" is spreading like wildfire on social media. Noticing the trend, Marvel Comics has quickly jumped onboard and been encouraging it. In the latest episode of Marvel's The Watcher Show, host Lorraine Cink did some "grooting" of her own and encouraged fans to share their own "grooting" videos on social media using the hashtag #grooting.

Anything that gains this much steam online will likely jump into the dance clubs. Expect to see videos of DJ's playing "I Want You Back," while an entire dance floor engages in "grooting." Yes, grooting is likely just getting started, and "grooting" looks well on its way to becoming the next Gangnam style dance craze.

Grooting Is Starting To Become A Thing