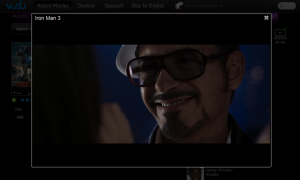 Were you, like me, one of those people who pre-ordered your Blu-ray copy of Iron Man 3 before the movie was even out in theaters? You know--the one they had available at Wal-Mart stores, complete with a digital copy of the movie that would become available three weeks before the physical disc dropped? Well, we're now within that three-week window and as a fellow consumer, I can assure you that your Flixster/Vudu version of the film will stream when prompted. You can also stream all of the digitally-available special features, including sneak peeks at some upcoming Marvel TV projects and a pair of Iron Man featurettes. It appears as though, at least so far, it's only available the pre-order customers. Amazon Instant Video still lists the streaming copy as being available on September 24, and even Flixster (who fulfills Vudu's orders) says it's not currently available. It's not even available to stream on your Flixster account if you do own the movie; you've got to go in through the Vudu app, in spite of the fact that the accounts sync and generally everything is identical. If you did pre-order it, though, you can stream it to your PC or Vudu-enabled device (like a Sony Blu-ray player), or you can download your HD copy. It appears as though no standard definition copies have yet been made available, possibly because there was no preorder option available for DVD, only Blu-ray. The digital copy, if it's like most other recent blockbusters, will be available on iTunes, Flixster and Amazon a week from today, with the official DVD and Blu-ray release date coming on September 24.