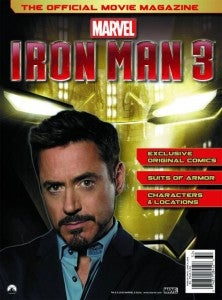 Disney and Marvel Studios are going all out when it comes to promoting Iron Man 3. Already, we've seen tie-in comic books, promotional product campaigns, video games, posters, and multiple commercials and trailers. Now, add an official Iron Man 3 movie magazine to the list of promotions. The Iron Man 3 movie magazine features a large image of Robert Downey, Jr as Tony Stark on the cover. Information inside will include exclusive original comics, photos of suits of armor, and characters and locations. The official Iron Man 3 movie magazines is being published by Disney Publishing and is scheduled to arrive in stores on May 1, 2013. Iron Man 3 is scheduled to be released in movie theaters in the United States on May 3, 2013.