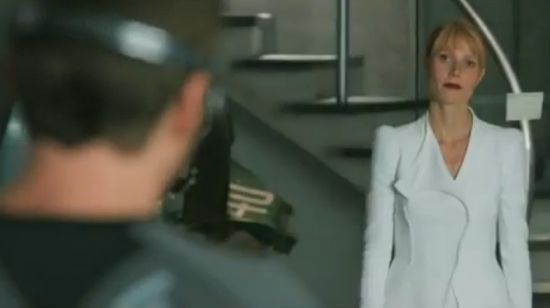 Awhile back we heard a rumor that Tony Stark and Pepper Potts would break up in Iron Man 3. However, since it only came from one source, we weren't sure if it was just speculation. There is quite a bit shown in the Iron Man 3 trailer which could lead to someone speculating that things might get rocky for Tony Stark and Pepper Potts. In the Iron Man 3 trailer, Tony Stark can be heard telling Pepper Potts, "I hope I can protect the one thing I can't live without." Now, technically the one thing that Tony Stark can't live without is his arc reactor chest piece, but most have assumed that Tony Stark in talking about his girlfriend Pepper Potts. Later, in the same trailer, Guy Pearce's character Aldrich Killian is shown kissing Pepper Potts on the cheek. Also, Stephanie Szostak's character is shown pushing Tony Stark up against a wall and leaning forward like she is about to kiss him. Based on information Comicbook.com has gathered from Iron Man 3 set sources, Tony Stark goes through a period of depression and loneliness. In particular, one segment involves Tony Stark spending time in a small Tennessee town. There definitely appear to be a lot of things we know about the movie that would support a storyline that involves Pepper Potts and Tony Stark breaking up. Then, there's also the new issue of Empire Magazine, where they quote Gwyneth Paltrow as saying, "He gets caught in a feedback loop. Pepper adores him, but she absolutely gets fed up with him." Empire also describes a scene from the movie by noting, "It begins with an armored Tony bickering with a frantic Pepper and new arrival Maya Hansen (his super-scientist old flame, played by Rebecca Hall), then suddenly shifts into an action sequence as The Mandarin takes up Tony's invitation." Could Tony Stark experience a bout of infidelity with old flame Maya Hansen? Why else would Tony Stark be bickering with a frantic Pepper? What is Maya doing in the Malibu mansion to begin with? Will Pepper Potts and Tony Stark be the latest comic book couple to call it splitsville? Something to think about between now and the time Iron Man 3 gets released in movie theaters on May 3, 2013.