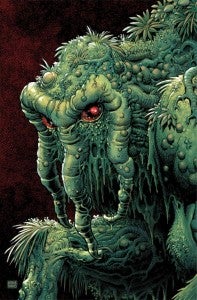 One of the biggest mysteries of Iron Man 3 is exactly who Stephanie Szostak is playing. Awhile back Comicbook.com looked at four possibilities of who Szostak's character might be. While the most persistent rumor points to Janet van Dyne, one of the most believable rumors points to Bethany Cabe. Now , thanks to IMDB yet a new rumor has surfaced for Stephanie Szostak's role, which was not on our original list of four likely suspects. IMDB now lists Stephanie Szostak's role as Brandt. Of course, IMDB isn't always reliable, but it does raise a very interesting possibility. There is a Marvel character named Ellen Brandt. This particular Marvel character works for A.I.M. and lives in Florida. In Iron Man 3, it's been confirmed through set photos that A.I.M. plays a role in the movie. It's also been confirmed that Iron Man 3 is partially set in Florida, and the cast and crew even traveled to Florida to film. What if Ellen Brandt is the Stephanie Szostak character that Tony Stark meets in Florida? Here's where it gets really interesting. Ellen Brandt was married to Ted Sallis, who was a S.H.I.E.L.D. agent working on a project to recreate the super-soldier serum. Brandt betrayed Sallis and tried to take his research. When Sallis tried to flee, Brandt shot him in the back. Sallis fell into a swamp and in desperation took the super-soldier serum he had been working on, which led to him becoming Man-Thing. Now, there has been no evidence at all that Man-Thing actually appears in Iron Man 3, but it would be very interesting if Marvel is introducing a character in Iron Man 3 that is connected to Man-Thing's origin. Could Marvel Studios be setting up an eventual Man-Thing movie?