What makes for an epic movie trailer? An epic movie trailer is one that resonates with people strongly enough that it creates interest in seeing the movie and also inspires parody videos. Just think about how many parody videos there were for The Dark Knight Rises, which was like a free viral marketing campaign for that movie. Our guess is that the Iron Man 3 trailer has just the right mix of action, drama, and weirdness that we can expect the parody videos to start arriving any day now. Here are the five freakiest scenes from Iron Man 3. The Giant Bunny In The Explosion – The Mandarin hates bunnies. He sent his helicopters to blow up Tony Stark's Malibu mansion. Some might think it was Iron Man that he was after, but we know it's the giant stuffed bunny that is the real target. However, the bunny was unphased by the attack. As Tony Stark and Pepper Potts are sent flying through the air, the bunny just sits there calmly.

The Robot With A Dunce Cap 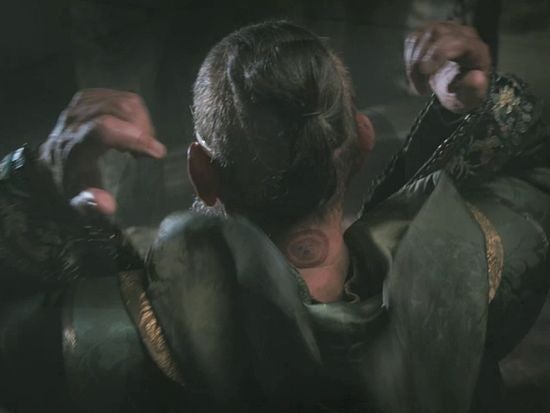 – In addition to having a big, booming voice that has proven to be a little controversial, The Mandarin also has a rather unusual tattoo. The tattoo appears to be Captain America's shield logo with an "A" for anarchy in the center rather than a star. Is the tattoo just a drunken mistake that The Mandarin made one night in college? Or is it some type of warped logo for his terrorist organization? Of course, some suspect that maybe it's not really The Mandarin at all with the tattoo and is someone else in disguise as The Mandarin.