Director Guillermo del Toro is readying his Legendary/Warner Bros. co-production Pacific Rim for release next week, but there's already been substantial talk about a project of his that still hasn't received an official green light from Warners. That would be Dark Universe, often colloquially referred to as Justice League Dark--a DC Universe team-up film that features characters like Swamp Thing, John Constantine and Deadman instead of Superman, Batman and Wonder Woman. And while most fans are excited to see what del Toro could do with such a property, there's been some question ever since it was first revealed as to whether or not such a film could actually get made. According to Guillermo del Toro, it will feature Swamp Thing, Etrigan the Demon, Constantine, The Spectre, Deadman, Floronic Man and Zatanna Zatara. There are also one or more mystery characters that del Toro refused to reveal, because it would give away the plot. The director has also revealed the he is writing the outline, and he has already gotten a writer to accept the project. He describes the writer as the "perfect guy for the job," but won't name him until his schedule clears up enough to begin work in earnest. Earlier this week, del Toro described starting a first draft of the script to keep the project moving forward while they wait for the writer. 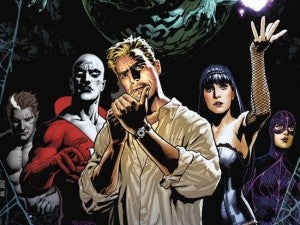 All of which makes fans cautiously optimistic; until there's a name on the script, or a draft turned in, or an official red light, this could easily be another tantalizing-but-unproduced project. Those are plentiful in Hollywood, and del Toro has a few himself--one needs only to say the words "Hellboy 3" to hear all about it from fans and even the film's stars. Even after any or all of those things are accounted for, you've got a studio in Warner Bros. with a history of commissioning DC projects and then shelving them when they aren't working or get too expensive. And then there's Legendary Pictures. The studio that helped fund the Dark Knight Trilogy and Man of Steel seemed, not that long ago, to be the obvious partner for Warners in making an expensive, supernatural superhero movie with del Toro. After all, they put up huge amounts of cash for the director's monsters-versus-robots flick Pacific Rim. But recently, Legendary has severed ties with Warner Bros. and is rumored to be going into business with either Lionsgate or Universal, where their comic book franchises would be limited to things like RED and Hellboy. That last one, of course, is interesting: We've already wondered aloud whether bringing Legendary and Universal together could result in finally putting del Toro and star Ron Perlman to work on Hellboy 3. But if there's a realistic chance of that--and if del Toro's relationship with Legendary is as good as that makes it sound--what of his relationship with Warner Bros.? Would he try to continue to work with both, especially on a movie that seems like it may or may not actually move forward? Without knowing the personal relationships of those involved, it's hard to guess--but certainly it seems as though removing Legendary from the Dark Universe equation creates an additional (and not insignificant) stumbling block for all involved. It also seems likely that Legendary--who will be bringing their Pacific Rim property with them wherever they end up--would be less apt to work around Warner's schedule for prospective sequels than they would be with a studio with whom they didn't already have bad blood. And certainly without del Toro the whole thing feels a lot less likely to be a priority.

Justice League Dark: Does Legendary Split Make it Less Likely to Be Made?