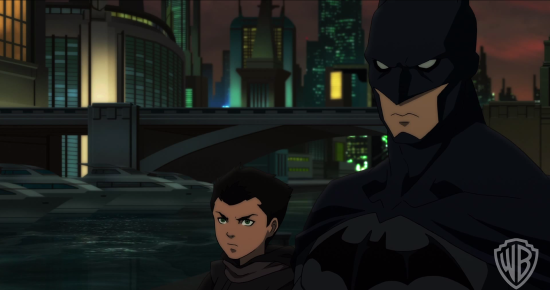 The latest episode of DC All Access has an interview with Jason O'Mara, the voice actor playing Batman in the upcoming "Son of Batman" animated feature. O'Mara spoke a bit on how he found his Batman voice. "This current generation is familiar with two iconic Batman voices," said O'Mara. "There's the Christian Bale voice and the Kevin Conroy voice. But I needed to find my voice somewhere in between. We came up with something that I think is quite interesting. It's still dark, but there's also moments for levity and there's also moments where he can be human." O'Mara then goes on to read a grocery list using his Batman voice, an act that even he can't believe he is doing. There's also a clip from "Son of Batman," showing Batman and his son, Damian, getting in the Batmobile together after Damian's mother, Talia al Ghul, leaves him behind. In "Son of Batman," Batman learns he has a violent, unruly pre-teen son, secretly raised by the terrorist group the League of Assassins. "Son of Batman" will be released May 6, 2014.

Madame Web Cast and Characters Rumored to Be Confirmed