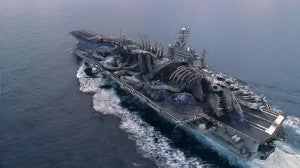 Way back in November, fans got their first glimpse of a dead Kaiju from Guillermo del Toro's anticipated monsters-versus-robots film Pacific Rim. Riding on the deck of an aircraft character, the massive beastie was seen in grainy "news" footage, with little else detailed about it, its life or how it died. Well, they've given a little resolution to that. The monster seen being carried to sea atop the aircraft character was apparently the first Kaiju to attack mankind--and it was called The Trespasser. A clearer version of that image has been released by Warner Bros. today, along with the caption, "The infamous first Kaiju, Trespasser, slaughtered hundreds of thousands." With this being the first of the Kaiju, it may not play a huge role in the film--but will likely be a key part of the prequel comic book series by Legendary Comics. "The idea was, from the start, not to do an adaptation of the movie, that, with very rare exceptions, suck," del Toro told a small group of reporters at New York Comic Con. "I always thought it was a lose-lose proposition to try and adapt the movie into comic book form. We thought about this as the most humble trans-media attempt. When we were developing the movie, both Travis and I kept writing biographies for the characters and eventually, we started developing the design and the tech for the Jeagers and the story for the Kaiju and we ended up generating a bible that was several hundred pages long. There was such richness in that material, so many ideas that were there."