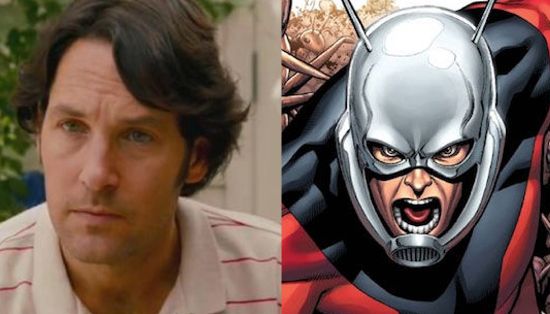 So here's one of the more unusual rumors to surface recently. Thanks in large part to an off-handed comment by an Oscar show's talent coordinator, people are starting to buzz that Paul Rudd could be cast as Ant-Man. According to Yahoo Movies, Paul Rudd was hanging around with Chris Evans and Mark Ruffalo backstage at the Oscars when Oscar talent coordinator Danette Herman said, "You look like one." Of course, since Chris Evans plays Captain America and Mark Ruffalo plays the Hulk, the inference was that Paul Rudd looked like one of The Avengers. Of course, seeing an actor hanging out with two of the actors that play Avengers and speculating that actor will play Ant-Man is a pretty big stretch. So, Comicbook.com did some investigating, and it turns out that Chris Evans and Mark Ruffalo weren't the only Avengers that Paul Rudd spent some time with, as IMDB has an Oscar photo of Paul Rudd also hanging with Jeremy Renner, who plays Hawkeye. Still, the fact that Paul Rudd spent time with three Avengers hardly proves he's going to be Ant-Man. Then again, it probably doesn't hurt, because Chris Pratt and Anthony Mackie both had a connection with Chris Evans from "What's Your Number?" before they were cast as Star-Lord and the Falcon. Oh, and did we also mention that two days after the Oscars, Ant-Man director Edgar Wright tweeted about Paul Rudd. Wright tweeted, "On Saturday @lynnsheltonfilm took this Omen-esque photo. It may mean Paul Rudd will die horribly. Pray for him. pic.twitter.com/6U1aAd0CTB". Seen with three Avengers, tweeted about by the director, it's probably more conclusive than the majority of casting rumors. Seriously though, think about how Marvel Studios President of Production Kevin Feige described Ant-Man. Feige said, "It will of course be firmly planted in the MCU, but a different corner than we've seen before." Director Edgar Wright had a very similar comment describing Ant-Man. Wright said, "It's a way of doing a superhero film within another genre. I wanted to tell an origin tale in a slightly different way. It's part of the Marvel cinematic universe, but it also feels like its own piece." Given some of Edgar Wright's previous work, we sort of get the feeling that Ant-Man might be filled with a lot of dark humor. Also, think about Marvel's recent casting choices. They picked Chris Pratt to play Star-Lord in Guardians of the Galaxy, and he's one of those actors who can do both serious roles and comedy. Marvel Studios had success by mixing humor into The Avengers, which seems to be setting the tone for all their movies going forward. Someone like Paul Rudd who has a dry sense of humor is exactly the type of actor that Marvel Studios is famous for casting. Even though the Paul Rudd as Ant-Man rumor got started based on a whim, we sort of think there could be something to it.