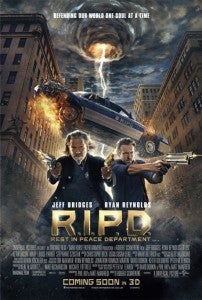 Universal Pictures Canada have released a three-minute behind-the-scenes "inside look" at R.I.P.D., the forthcoming supernatural action movie starring Iron Man's Jeff Bridges, RED's Mary-Louise Parker and Green Lantern's Ryan Reynolds. The film, due in theaters on July 19, is based on the Dark Horse Comics title of the same name and follows the adventures of the "Rest in Peace Department," ghost police whose beat is the afterlife. Dark Horse Entertainment are producing the film along with Universal Pictures; the two studios have collaborated in the past on films like Mystery Men and Hellboy II: The Golden Army. Check out the preview below.

R.I.P.D. Gets an Inside Look From Universal Pictures Canada