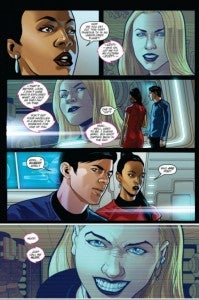 Remember last month how speculation that Jimmy Olsen might be a woman in the Man of Steel made the Internet go crazy. Well, it looks like a classic Star Trek character might also be getting a sex change in Star Trek Into Darkness. In the Star Trek Countdown To Darkness prequel comic book released in comic book stores today, a character named Mudd is introduced. When Star Trek fans hear the name Mudd, they think of notorious con artist Harry Mudd, who ruled over a population of mostly female androids. However, in the Star Trek Countdown To Darkness comic book, Mudd is a woman. Mudd describes herself as a businesswoman making a delivery. She states she doesn't care who she works for "as long as they pay on time." When the Star Trek crew asks for a name, she tells them, "Mudd. Just call me Mudd." Of course, there's no guarantee that all of the characters in the Star Trek Countdown to Darkness prequel comic book will appear in the Star Trek Into Darkness movie. However, we can't think of any other reason that the comic book prequel would bother to introduce Mudd as a female character unless they were trying to match something in the movie that the comic leads into. Since the new version of Mudd only provides her last name, it's also possible that instead of changing Harry Mudd's sex that they are just introducing a new female character as Harry Mudd's daughter or something along those lines. One other interesting thing about the new female Harry Mudd is it also looks like she's a Bajoran (notice the crinkled nose). Start checking IMDB now for actresses with unidentified roles in Star Trek Into Darkness.

Star Trek Into Darkness: Harry Mudd Is A Woman?