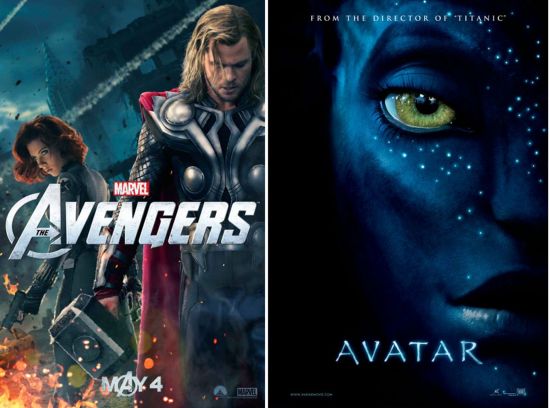 After making Harry Potter's opening weekend box office record vanish, what trick will The Avengers pull off next? Could the superhero phenomenon actually topple Avatar? While Avatar's $760.5 million box office haul is considered unreachable by most, the same could have been said of Harry Potter's opening weekend record a week ago. The Avengers is one of those rare movies, where fans are already returning for multiple viewings. Positive buzz will also help bring in those who previously had no interest in the movie to see what all the fuss is about. The Avengers is likely looking at a very strong run throughout May and possible into June and even July as well. The Avengers is already the fastest film to reach $200 million at the box office, and we expect it will be the fastest to hit $300 million and $400 million. After $400 million, The Avengers should start to slow as other summer blockbusters are released, but it should still shoot past $500 million with ease. The Avengers will almost certainly overtake The Dark Knight as the highest grossing superhero movie of all time, which will put the movie at least at number three on the all time box office list. The real challenge will be if The Avengers can reach the two James Cameron films at the top. Titanic at $658 million seems very within reach, but Avatar at the top does seem a stretch. Still, if some of the other summer blockbusters falter, people could opt to see The Avengers again instead of a newer release. The other big May releases like Dark Shadows, Battleship, and Men In Black III better be really good in order to stand a chance against The Avengers. It's entirely possible that The Avengers could stick in at least the number two spot all the way until June when Snow White and the Huntsman and Prometheus are released.

Will The Avengers Topple Avatar?