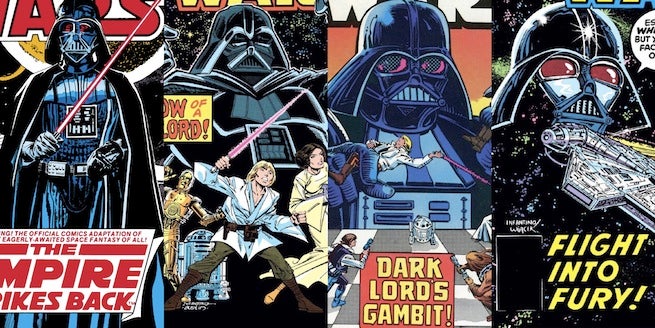 After the record setting debut of its first issue of Star Wars since 1986, Marvel is following up that act with this week's release of Darth Vader #1 by Kieron Gillen with art by Salvador Larroca. As the title suggest, this series will focus on one of pop culture's most iconic and complex villains, Darth Vader.

To mark this series debut, we reviewed the first 50 issues of Marvel's original Star Wars series (which consists of the A New Hope and Empire Strikes Back adaptations along with 38 other comics featuring original adventures) and picked out our 10 favorite Darth Vader moments. This list should hopefully demonstrate that even in comic book form, nothing is better than Vader. 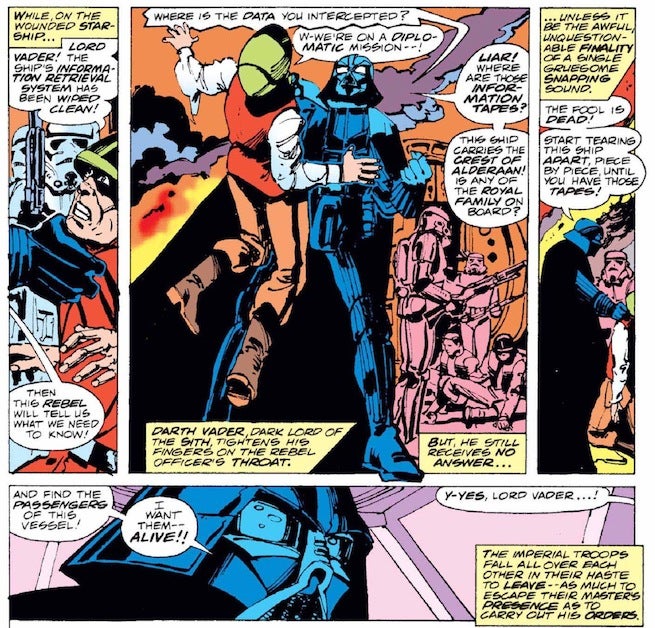 Straight from the big screen, in the very first issue of Marvel's Star Wars, Vader proves to be an unholy menace, murdering a member of the rebel alliance while hunting for "information tapes" (that fans of the movie will note where delivered by Princess Leia into R2-D2's hard drive). If you consider the fact that the first few issues of the series were released in advance of the movie (as a teaser), then that makes the impact of Vader's first appearance all the more awe-inspiring. There is absolutely no way for readers to misunderstand the fact that Vader is a violent force of nature, capable of terminating whatever crosses his path if it proves to be an inconvenience to him. Yet, he also exhibits a certain amount of restraint in demanding any other survivors of the attack be brought to him alive for questioning. Rather than impetuously burning everything to the ground, Vader maintains a level of focus on getting the Empire the information it needs to fend off any potential attacks by the alliance. 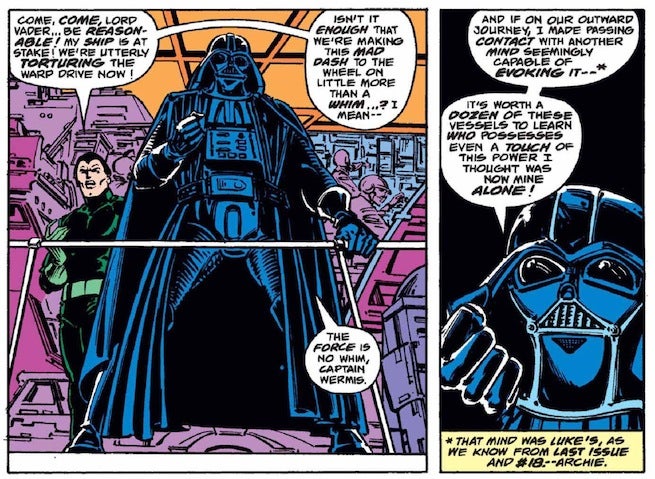 9. The Force is Strong

It's pretty clear from that until Marvel published its Empire Strikes Back adaptation, the Star Wars comic book creative team had no clue of the big twist regarding the father-son relationship of Luke and Vader. As a result, Vader's obsession with Luke is portrayed as being about how this mysterious fighter pilot was able to demonstrate come control over the force, a power Vader believes to be his alone.

In Star Wars #22, Vader lashes out at imperial star destroyer Captain Wermis for questioning the authenticity of the force. Vader wants to follow up on a lead regarding Luke's whereabouts, leading to Wermis wondering if Vader is wasting his time and risking the health and safety of the ship. Vader uses the Force to choke Wermis out, calling him a "Kobarian swamp dog" in the process. 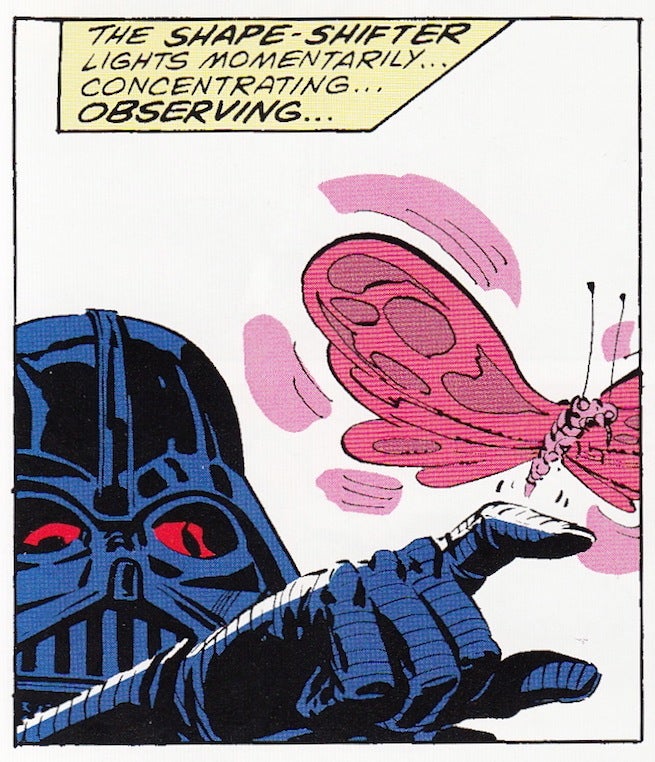 In a fun little standalone issue that comes after Empire Strikes Back, Leia and Vader come nose-to-nose over a diplomatic matter on the planet Aargau regarding the sale of X-Wing fighters to the rebel alliance. Vader is accompanied by three bodyguards, including a shape shifter, as he attempts to meddle with Leia's negotiations for the fighter ships (why he just doesn't come in and wipe out everyone with the Force is a whole other issue).

Anyway, Vader has the shifter transform into a venomous breed of butterfly to attack one of Aargau's leaders. It takes a certain level of confidence and swag for a lord of darkness like Vader to align himself with a purple flying insect, but Vader pulls it off. 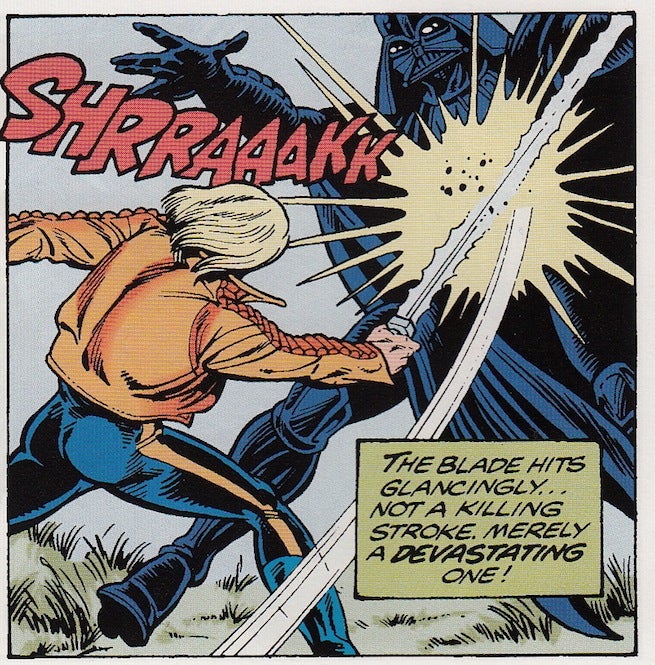 In the runup to Marvel's Empire Strikes Back adaptation, Darth Vader starts to resemble a Bond villain of sorts – orchestrating these highly elaborate plans to capture/kill Luke, Leia and the rebels, rather than just … ya know … killing them by mentally choking the life out of them. All the same, Vader's machinations do deliver this one memorable scene from Star Wars #37 when Marvel teases a lightsaber battle between Luke and the Sith Lord.

As part of a diplomatic mission, Vader goads Luke into a duel on a planet that is harbors crystallized rock that shoots out of the ground at inopportune times. Luke engages Vader and appears to be holding his own against him (despite not having yet been trained by Yoda) before the bait and switch is revealed. The man Luke is fighting is not actually Vader but a mutual enemy of there's Orman Tragg. Vader figures by setting the duel on such dangerous terrain, both of his enemies will end up dead and he'll be all the better for it.

Sure, not actually having Luke and Vader fight is a bit of a letdown, but the lead-up before Marvel's double cross is a lot of fun. Plus it's great to see Vader go to such great lengths to mess with his enemies. 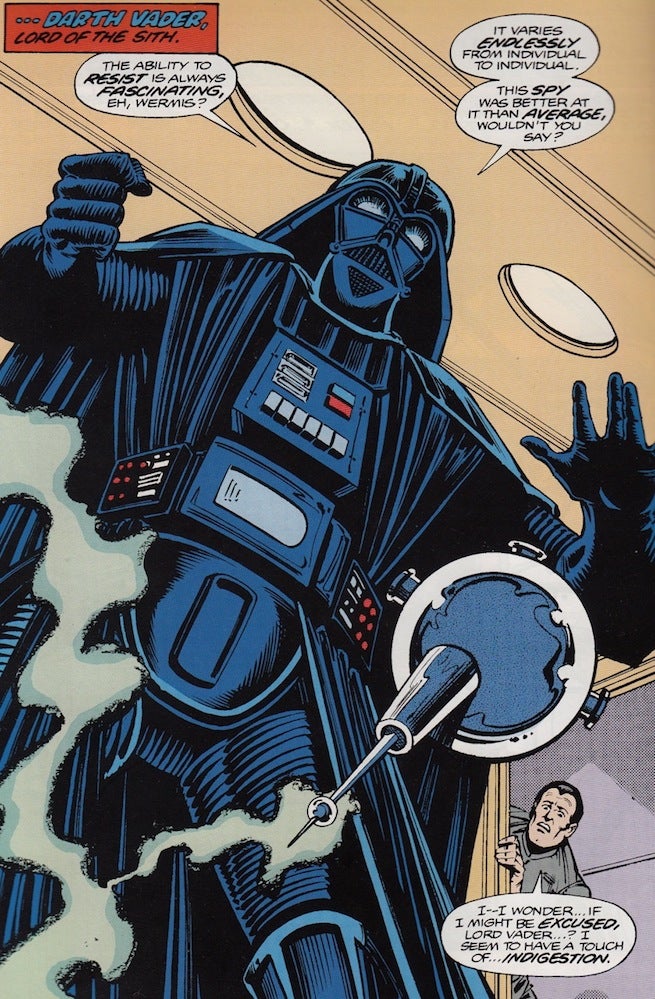 Vader almost appears to be smiling in this fun splash page from Carmine Infantino and Bob Wiacek as the "Dark Lord" continues his quest to learn the identity of the pilot who destroyed the Death Star. While the artists take the less sadistic route and leave all of the actual torture off-panel (though they do indicate that involve some kind of droid blaster device), apparently whatever Vader did to the rebel left Captain Wermis sick to his stomach. Vader, being the sinister person that he is, mocks Wermis for the queasiness, but not before relishing just how long the rebel held out before finally succumbing to the torture. 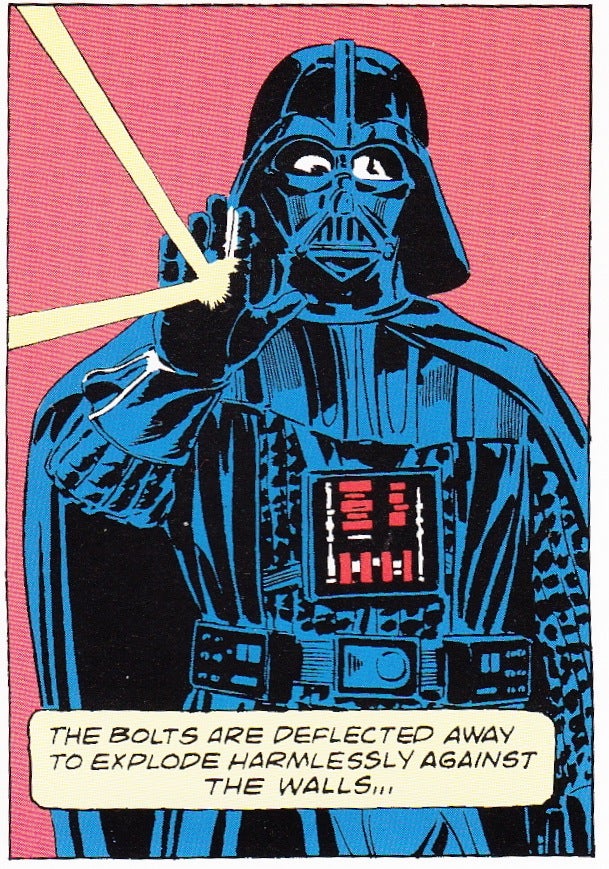 5. You Don't Need That Blaster

In one of the pivotal moments of Marvel's Empire Strikes Back adaptation, Han and Leia are betrayed by Lando Calrissian, who cuts a deal with Vader and the Empire in order to keep them from meddling with Cloud City. Of course, Vader quickly reneges on his deal with Lando, but it's not like the head of Cloud City actually has any leverage in these negotiations.

In case there was any doubt that a guy who can crush throats with his mind was not someone who could be vanquished via traditional methods, when Han pulls his blaster on Vader, the Sith lord calmly deflects the rogue's fire and then uses the Force to snatch the gun from his hand. And just like that, Han and Leia are defeated. Leia would later escape, but Han would be frozen in carbonite and transported away from Cloud City from the bounty hunter Boba Fett. 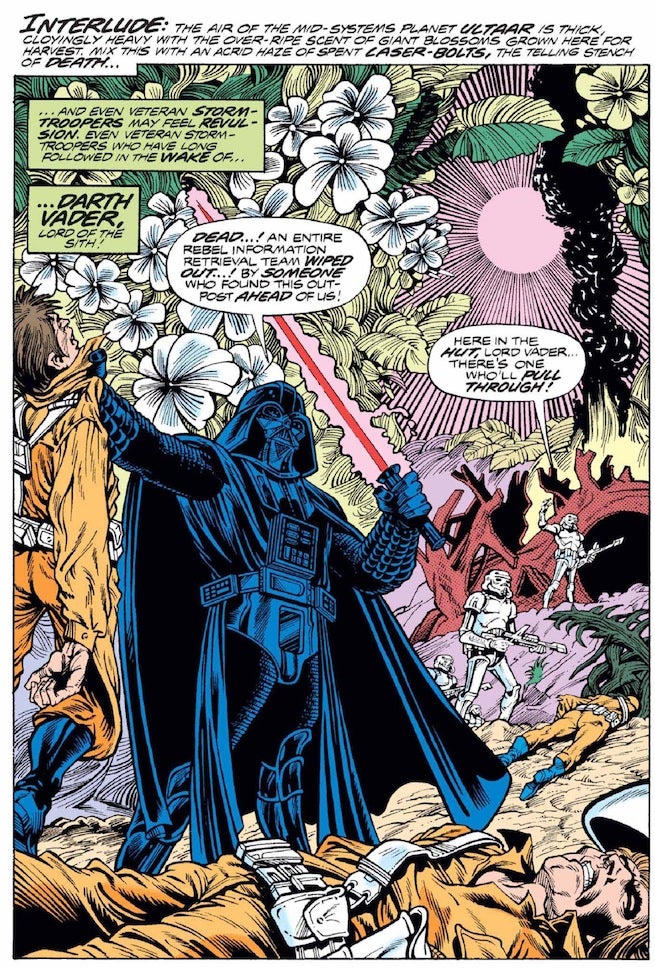 After Luke successfully destroys the Death Star in the final issue of Marvel's film adaptation of A New Hope, things are fairly quiet from Camp Vader until Han, Luke, Chewie and Leia find themselves fighting for their lives at the Wheel – an intergalactic casino and "pleasure center." Thanks to an earlier incident, Luke finds himself in a pseudo-catatonic state, but is eventually prompted back to reality after having a vision of Vader, leading him to believe that the Sith leader had somehow survived the Death Star explosion.

Sure enough, Vader appears on the very next page, proving that any reports of his death were greatly exaggerated. He has arrived at the planet Ultarr where a cyborg hating hitman named Valiance had struck down a rebel outpost while searching for Luke and Co. All Vader concerns himself with is finding this person who has exhibited some control of the Force. But just to prove he's not cruel, Vader does strike down the one rebel who Valiance allowed to live, putting him out of his misery. 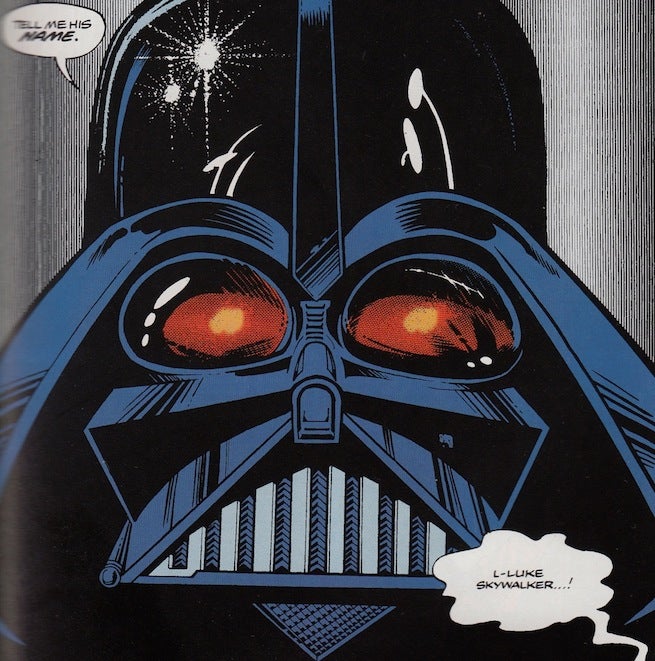 Nearly 30 issues after Luke blew up the Death Star Vader is finally rewarded for his persistence when one of the rebels he is torturing comes forward with a name: Luke Skywalker. Now, because this comic was written and published before the Empire Strikes Back was released in theaters (along with its big reveal regarding the relationship between Vader and Luke), the narration in Star Wars #35 describes the unveiling of Luke's identity to Vader as being "almost anticlimactic." Perhaps if writer/editor Archie Goodwin was made privy to that one bit of important information from Empire, he could have worked in some semblance of foreshadowing into his narrative.

All the same, from the comic book perspective, this is avery critical moment for the state of the series. With this information at hand, Vader is now able to strike more strategically at Luke and the Alliance. 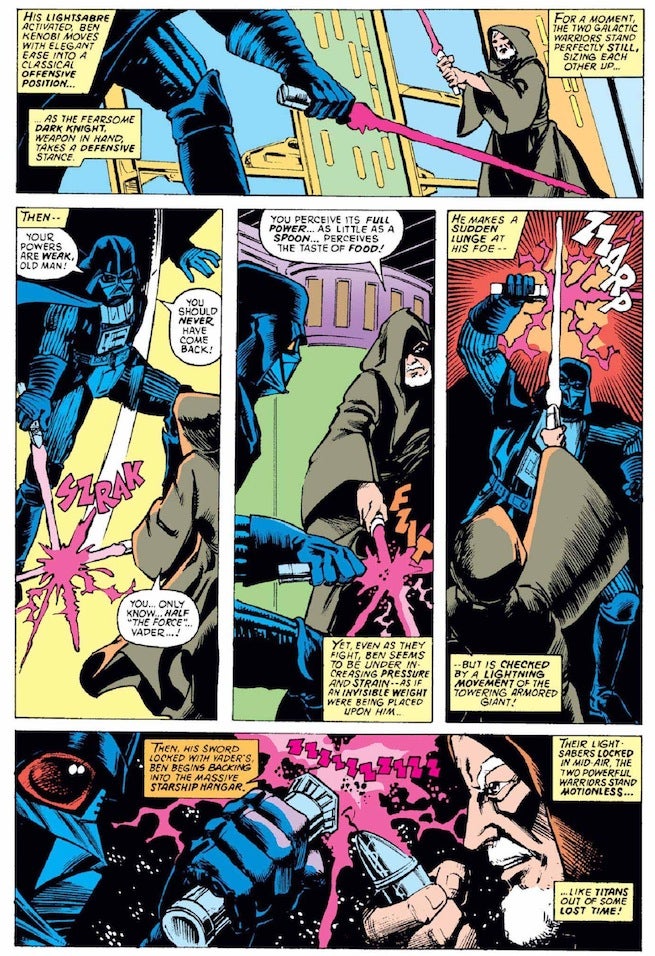 "Now the circle is complete," Vader famously tells his former mentor, Obi-Wan Kenobi, before dueling him to the death in this iconic scene that was adapted from the big screen. Vader's light saber battle with Obi-Wan proves to be a definitive moment in the original Star Wars trilogy, inspiring Luke to learn the ways of the force and continue on the Jedi tradition.

Roy Thomas's script in Star Wars #4 makes specific mention that something is holding Kenobi back as he engages Vader in the duel, foreshadowing the old Jedi master's inevitable end. However, as Kenobi notes, moments before Vader's fatal blow, by striking him down, he is now capable of coming back stronger. So, perhaps the Sith lord's victory wasn't quite so definitive. 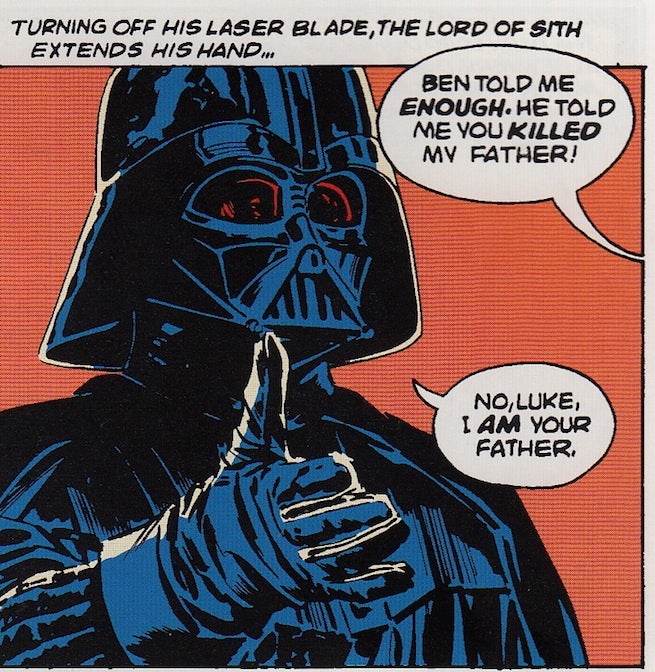 1. Luke I Am Your Father

Come on… it's one of the definitive scenes in the Star Wars trilogy and can stake a claim to one of the most famous lines in cinematic history. Unless the Marvel adaptation completely butchered the shock and intensity of this reveal (which it kinda did with the Han/Leia, "I love you/I know" sequence one issue prior), there's no way something as mind blowing as the big villain admitting that he is actually the father of the story's hero wouldn't top a list like this.

Sure, it might be a bit of a cheat to use something from the film adaptation from the top spot, but "Luke I am your father" is truly one of the most perfect moments in pop culture history. Many of us wouldn't be fans of Star Wars, or fantasy/epic stories in general without "Luke I am your father," nor would any of us really care enough about Darth Vader to go out and buy an ongoing comic book series about the character without this fascinating wrinkle.

Spider-Man: No Way Home Stars Speculate On Who Timothee Chalamet Could Play In The Franchise