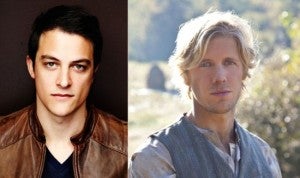 Earlier this week it was revealed that the role of the Flash for the CW TV series would be cast by the end of this month. The Flash is scheduled to first appear in a Season 2 episode of Arrow, which is set to start filming on September 30, 2013. In total, the Flash is supposed to appear on three episodes of Arrow before getting his own spinoff series. According to Latino Review, there are three actors in the running to play The Flash. Australian actor James Mackay is reportedly one of the actors under consideration. MacKay appeared in The Straits TV series and is also in the upcoming film Singularity. Matt Barr is reportedly another of the actors in the running. Matt Barr played Johnse Hatfield in Hatfields & McCoys, and he appeared in the CW series Hellcats. The third actor in the running for the Flash role is unknown. Update: Latino Review is now reporting that Grant Gustin, who plays Sebastian Smythe on Glee, is the third actor in the running for the role.

Actors In Running To Play The Flash Reportedly Revealed