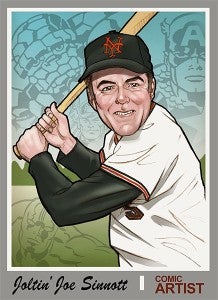 The Albany Comic Con announced today that over the course of the summer, they will hold two separate benefits to support the Albany Ronald McDonald House. The first will be a charity art auction that will take place the day of Albany Comic Con on Sunday, June 16 at the Holiday Inn on Wolf Road in Colonie, NY. Professional artists attending the con have donated original sketches done exclusively for the show, which will be auctioned to bidders the day of the show. The convention has held similar auctions the last two years, raising thousands of dollars for the RMHC. "The artwork looks incredible," said Albany Con promoter John Belskis. "All of this year's pieces are based on Marvel's The Avengers comic book movie, and I expect them to be very in-demand." The second fundraiser will be a team up between Albany Comic Con and the Tri-City ValleyCats, the Class A minor league affiliate of the Houston Astros. The ValleyCats game will take place 7 p.m. Saturday, July 6, at Joe Bruno Stadium on the campus of Hudson Valley Community College in Troy. Albany Comic Con will honor legendary comics artist Joe Sinnott, whose work graced almost every major Marvel Comics title in a 63-year career. Dubbed "Meet Joe at the Joe," the event will give fans a chance to meet Joe Sinnott, receive an exclusive Joe Sinnott baseball card, and get autographs from Joe and other local comic professionals. "Joe's 63 years as a professional comic artist, working on classic Marvel titles like Fantastic Four, and Amazing Spider-Man, is an incredible run," said Belskis. "He truly is a local treasure." Albany Comic Con will be selling tickets to the July 6 baseball game. Game tickets are $5, and come with the Joe Sinnott baseball card. Proceeds from the tickets will benefit the Ronald McDonald House Charities of Albany. Show hours are 10 a.m. to 4 p.m. Admission to the convention is just $5. Tickets for both the convention, and the ACC / ValleyCats night, are available on the convention web site. Guests to the show include Sinnott, Ron Marz, Matthew Dow, J.M. DeMatteis, Todd Dezago, Joe Staton, Fred Hembeck and more.

DC Reunites the World's Finest in Superman's Return to Earth

Chainsaw Man Returns This Week With Some Major Deaths