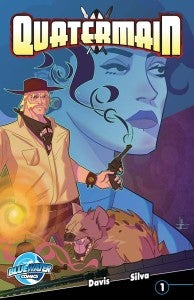 Allan Quatermain, the legendary pulp hero who inspired Indiana Jones and served as a member of Alan Moore and Kevin O'Neill's League of Extraordinary Gentlemen, returns to comics later this year for his second Bluewater Comics miniseries.

Apparently titled simply Quatermain, the new miniseries will be written by Scott Davis and drawn by Hoyt Silva.

“Writing in the world of Allan Quatermain is truly going to the source of modern action adventure. He may be a product of 19th century Europe, but this story of greed, power, grief and redemption is as relevant as turning on today’s news’, said Davis.

Here's the official summary from Bluewater: It is 1883 and the face of Africa is in transition. Colonial powers are fighting over every inch of land and it is the Africans themselves caught in the vice of violence and exploitation. But Allan Quatermain is not interested in politics; he’s a grieving father travelling back to England to bury his son. That is until the weight of a bizarre attack stops his train and makes off with his son’s body. To get him back, Quatermain must wade through the underbelly of colonial African treachery and face the Dark Heart of the Mountain. This new chapter of the Quatermain saga is full of the excitement of its predecessors and offers a new supernatural twist that may be more than the legendary hunter can overcome.

The character is also featured in a new radio drama on Sires/XM called Allan Quatermain, Lord of the Locusts, which is apparently being treated as canon in the Bluewater Quatermain stories. Produced by Colonial Radio Theatre, it is also available now on Audible and on Amazon. The new series will also be adapted for radio in conjunction with the comic book release.