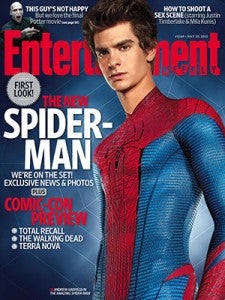 It's been a very big week for comic book movie fans. Earlier this week, the first poster for The Dark Knight Rises was unveiled. Now, the first set of images for the Amazing Spider-Man movie reboot have been released courtesy of Entertainment Weekly.

The Comic-Con preview issue of Entertainment Weekly is set to hit stands tomorrow (Friday, July 15, 2011), and it features Andrew Garfield decked out in his new Spider-Man costume (but without his mask). The special issue features interviews with stars Andrew Garfield and Emma Stone and with director Marc Webb.

Entertainment Weekly also confirms Rhys Ifans will be playing Doc Conners. Of course, Doc Connors is better known as a super-villain The Lizard. In addition to the cover image, Entertainment Weekly has also posted fifteen photos from the movie to EW.com.

The images include Andrew Garfield in full Spider-Man costume in various poses, Andew Garfield with Emma Stone, a close-up of mechanical web-shooters, Rhys Ifans, and more. The first official Amazing Spider-Man movie trailer is rumored to be coming next week with the premiere of the Captain America: The First Avenger movie.