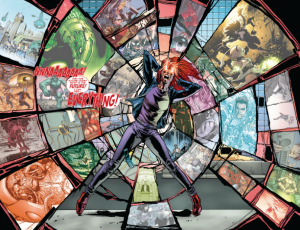 To borrow a phrase, "The future of Marvel NOW! is..." ...well, it's all there on the page at the end of Amazing Spider-Man #695. It seems as though a bunch of panels from yet-to-be-published Marvel NOW! books appear in a giant splash page in which Madame Web is assaulted by visions from the future. Among other things, we get a look at that Steve McNiven panel that's widely believed to be from a relaunched Guardians of the Galaxy, at least one sequence that appears to be from Minimum Carnage...and Wolverine speaking in front of a monument to the recently-deceased Charles Xavier. Several shots from "the future" appear to put lie to theories that Spider-Man would die or be radically physically altered--unless Doctor Octopus intends to turn him into some kind of odd water-being. Also featured: shots of Daredevil and Elektra, the All-New X-Men (that is, the original X-Men who are being published in a comic called "All-New"), lots of Captain America and Captain Marvel, Thor appearing to lecture Deadpool, The Hulk, Morbius and more. This isn't the first time that the major publishers have done something like this to tease and engage fans; Booster Gold seems to have been at the center of a bunch of them for DC Comics, from his famous "chalkboard teases" from 52 until Flashpoint to a similarly-spoilery full-page preview that expressly told the readers that its events were coming next year and appeared in Justice League International Annual #1. Marvel has done the same, with a famous teaser sequence in Avengers #5 back in 2010 that features some plot beats that are out of order and some that still haven't happened, but in hindsight is a relatively reliable timeline of Marvel's publishing initatives over the last couple of years.

Clue Will Get a Full Relaunch in 2023