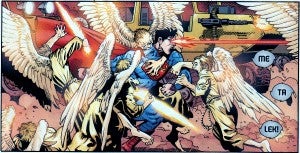 In today's Action Comics #14, Superman finds himself face to face with a mutltitude of angels.

But these aren't exactly the heavenly type, working for God and all that. Rather, Superman explains in the issue that "It's not a race of beings. The Multitude is all one thing--a single weapon with countless points aimed at us from a higher, fifth dimension."

Of course, Mr. Mxyzptlk, a classic Superman villain who seemed to be hinted at in Action Comics #0, hails from such a dimension.

Given that Morrison has used angels in his work before--most notably in his run on JLA--it may also be interesting to see whether this story could lead to the reintroduction of Zauriel to the DC Universe.

Angels Don't Work For God, But For a Superman Villain