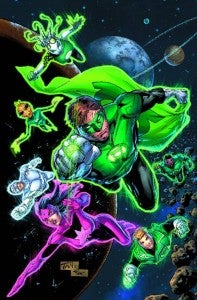 When the New 52 launched in September 2010, there were a couple of heroes who were immune to the line-wide changes to the history and characterization that rippled through DC's superhero universe: Green Lantern and Batman. the reasons were so obvious that DC didn't even bother trying to pretend it wasn't the case: these characters were largely left alone becuase they were doing well--selling well, doing well critically, and generally not perceived to be in need of an overhaul. It didn't hurt that Geoff Johns, the company's Chief Creative Officer, was writing Green Lantern and had been for years--in fact, that he was nearing completion on an epic run that completely rewrote the mythology behind the character. Or that the chief architect of the Batman titles at the time was Grant Morrison, who was in the final stages of a similarly ambitious uber-arc with Batman, which began in 2005. Unlike some other creators whose long-term runs were abruptly cut short, these two big guns were able to continue their epics, finish them in style, and...what? What's next for the Batman and Green Lantern family of titles? Obviously the things that have happened in the New 52 won't disappear; it would just be awkward and make continuity even harder to explain than it already is for these characters (if you don't believe us, as Green Lantern: New Guardians writer Tony Bedard, who recently performed some impressive verbal gymnastics trying to explain Kyle Rayner's status quo in an interview). Still, we already know that when Geoff Johns leaves, he's taking the writing staff with him and that, among other things, Simon Baz will no longer be the lead character in Green Lantern. Incoming writer Robert Venditti has promised that Hal Jordan will lead the book again, marking the first time since the launch of the New 52 that the most identifiable Green Lantern has actually been the star of the book. Venditti has also expressed a desire to explore the mythology that Johns has established and interact with the other corps of the emotional spectrum more, which sounds like more of the same...but it's difficult to imagine that after ten years of Johns, DC isn't looking to take the book in a very different direction in the near future, to avoid unwanted comparisons. 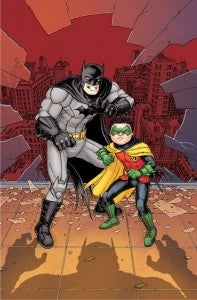 Meanwhile, Grant Morrison is a hair's breadth away from wrapping up his run on Batman--a run which will conclude within months, and which may (if the rumors are true) see a major character death in next week's Batman Incorporated issue that ties back to some of Morrison's earliest stories on Batman before the relaunch. Fans, critics and even other creators have noted that Morrison's Batman barely counts as in-continuity in the New 52, but either his perennial success with the character, his pride or something else has led DC to keep that "New 52" label on the cover and firmly plant the stories in the current DC Universe. But what happens when he goes? How much of his mythology, much of which is divorced enough from what Scott Snyder has been showrunning over on Batman that it's easy to ignore, will even "count" anymore, and what will happen with books like Batman Incorporated and Batwing when Morrison is no longer working for DC on a monthly basis, keeping his ideas fresh in the minds of the editors? Batwing, an extension of the Batman Incorporated brand and one of the lowest-selling Bat-books, is already slated for what looks like a pretty dramatic overhaul. The question now is the same one that faced Warner Bros. in regards to Christopher Nolan's Batman films: You've got a successful franchise which, without the key talent behind it, is likely to take a hit, audience-wise. Do you try to continue in that creator's vein, assuming that familiarity will breed loyalty to the brand rather than the creator? Or do you allow the creator to close out their chapter in the character's history, and then try a new direction that may not be as well-received but will at least bring in new eyes rather than relying on the old?

Are Batman and Green Lantern Going to Get Their New 52 Reboot?