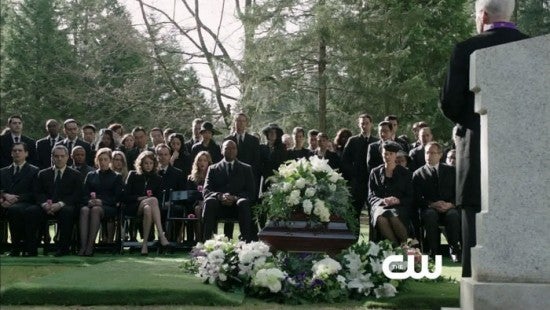 The episode opens on Moira's funeral, where Thea is in silent thought while the rest of the cast is mourning -- except Oliver, who is absent. Elsewhere, Sebastian Blood takes the oath of the Office of the Mayor. At the reception after the funeral, Blood arrives to give Thea his condolences and asks to see Oliver; she tells him that Oliver has been missing for days, and leaves. Sebastian talks a bit to Laurel about the pain of losing a parent. By the time he leaves, clearly she's suspicious. Elsewhere, Diggle and Felicity are talking about where Oliver might be. They're interrupted by Isabel, who tells them that if Oliver is smart, he went back to the island to hide, but maybe he'll be back for their funerals. 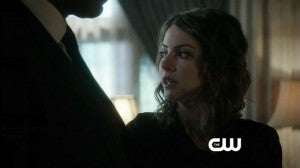 In his office, Walter is looking at a photo of the family that he always liked. Thea tells him that Moira never liked it. He tells her that her mother loved her very much.  She tells him that the whole thing only happened because Oliver hid the truth about Slade being a dangerous person. She blames him for not relating whatever happened on the island. Walter is stunned, and tells Thea that Oliver loves her very much. She leaves, telling him to keep the photo. On Lian Yu in flashback, Oliver, Sara and Knyazev board the Japanese sub and Oliver asks if Anatoli can fix it. He doubts it, but when Oliver tells him it's their only chance to kill Slade and escape the island, he agrees to try. At the Starling Police Department, Lance skipped the reception to return to the police department and work on finding Slade. Laurel approaches him to relate her suspicions about Blood, telling him that last time, she was a drunk but this time he needs him to trust her. He agrees. 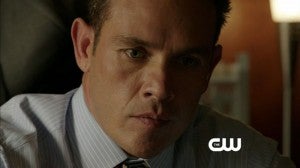 In Blood's office, he takes a call from Slade -- "just checking in" and telling Blood to "get to work." At the Foundry, Diggle and Felicity can't find any sign of either Oliver or Sara. They're running out of the pit viper venom to keep Roy sedated and running out of places to look for their missing friends. Felicity is starting to feel like they've got nowhere left to turn, but Diggle says he knows who to ask. Cut to A.R.G.U.S., where they come to see Amanda Waller, telling her that they need her to find Oliver for the sake of the city. Amanda is confrontational, but when Diggle tells her about the Mirakuru army, she agrees to look for him. At Verdant, Isabel arrives to serve Thea with a notice that she has to vacate the premises because Queen Consolidated is exercising its ownership of the building, including the foundry beneath it. She only has a couple of days. At Mayor Blood's office, Laurel comes to ask Blood for help with a case -- it's a fair housing case. Blood is happy to help her; he remembers cases like this from his time as a community organizer and she remembers them from CNRI. She leaves the file with him and, while she's there, bugs Blood's office with a remote wifi device that lets them get into his computer. In the course of things, they find a press release that proves Blood knew that Moira was going to be killed a day before it happened. At A.R.G.U.S., they've found Oliver; he's at a second "lair" he keeps, one that's different from the Foundry. On Lian Yu, Anatoli seems to be having luck getting the submarine running, but they're still stuck aground. The only way out is to blast free by using the torpedoes, which are manually operated. In order to free the sub, someone would have to sacrifice themselves. 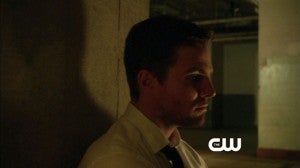 Diggle and Felicity enter Oliver's secondary lair, where he asks how they found him. They tell him Waller and ask what the place is; he explains that it started as a secondary base in case the Foundry was compromised but became someplace he could go to be alone. He blames himself for Moira's death, and reminds them that he could have cured Slade five years ago but because he didn't, everyone is in danger. He plans to surrender himself to Slade to end it. He thinks that he's the "one more person" Slade wants to kill. Felicity delivers a speech about destiny, trying to convince him not to turn himself in, but he says that the essence of heroism is to die so others can live.  He says all that's left is for him to die, since Slade has taken everything away from him. Felicity tells him there has to be another way, but he tells her there isn't and leaves. At the Mansion, Walter is trying to talk Thea down. She tells him that she's a jobless and homeless orphan -- that there's nothing left for her. She wants to start over somewhere else. Oliver enters, and asks what's going on. Thea says she's leaving the city, and Oliver asks to speak with her alone.  She asks him not to try to convince her to stay. He tells her that she should get as far away as possible -- that she's a good person and he can't have her lose that. He hugs her and he tells her that he knows he's not always been there for her but that he's always loved her. She tells him that she'll get in touch when she gets settled. As she leaves, Oliver calls Slade, telling him that he's coming to the pier alone, and that it ends tonight. Back on the island, Peter tells the group that he'll pilot the torpedo. He has radiation poisoning from experiments that Ivo was doing on him, so he's dead anyway and at least this way, he gets to die so that others can live. 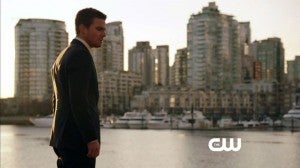 At the pier, Oliver is explaining to an unseen audience that he should have died on the Gambit -- that the pier is where it all started.  He says that no one else is going to die because of him -- and is struck by a dart. When he comes to, he's in the Foundry, where Diggle and Felicity are standing over him -- then, Laurel enters. She tells Oliver that Slade told her who he was -- that when he went missing, she reached out to Diggle and Felicity, who told her what he was doing. She asks for a moment, and asks him why he never told her. She has figured out that Tommy knew, and that Oliver was with him at the end. Ollie tells her that Tommy's last words were about her, and that he wanted to know she was safe. Oliver is sorry that he couldn't save him, and his mother, but that he can save Laurel and Thea and the city if he lets Slade kill him. Laurel starts to panic, telling him that he can't do that -- that losing Oliver so soon after her mother would destroy Thea. She tells Oliver that she knows who he is deep down and that person doesn't give up, that he always finds a way.  She tells him that the only way to protect the people he loves is by stopping Slade -- and by stopping Sebastian, because he's working with Slade. Oliver's resolve is strengthened when she tells him that Slade killed Moira so that Blood could be mayor. He susses out that Blood is the one in the skull mask, and that Laurel was right all along. Back on Lian Yu, Oliver wants Sara to get clear of the blast radius for the torpedo, in case it doesn't work and the sub goes down. He tells her to get off the sub and they will come for her when it's over. He tells Peter that what he's doing is brave, and Peter says it's no braver than coming back to the boat to save the prisoners. Oliver says he only went because he wanted to get home, and he's not a hero. Peter says "maybe not yet," and shakes his hand. They fire the torpedo, jarring the sub. Blood is out at a fancy restaurant, asking his bodyguard to stay outside because "nothing's going to happen to me here." When he gets to his table, though, Oliver is waiting. As the bodyguard is getting on an elevator, Diggle joins him. Cut to the bodyguard tied to a chair in Oliver's secondary lair. Clinton Hogue (the bodyguard) says he isn't afraid of taking a beating, but Diggle says that the interrogator will be Felicity. She begins emptying Hogue's offshore accounts. He relents once she reaches his parents' retirement accounts. Back at the restaurant, Oliver and Blood are talking about Blood's mayorship. Blood thinks he can make the city a better place, but Oliver tells him that Slade will never let that happen. Blood rolls over immediately, asking how Oliver knows. Ollie tells him it's becuase he's the Arrow. Blood still believes he can make the city a better place, with the Mirakuru army supposedly doing just enough damage to scare the city into following him into a brighter tomorrow. When Oliver tries to tell him that Slade will not keep his word, that Blood is a pawn in a much larger game, Blood doesn't believe him and leaves, telling him that it's a new tomorrow in Starling and there's nothing he can do to stop it. Thea is leaving the mansion when her phone rings -- it's Walter. She rejects the call and walks out. Back at the Foundry, Team Arrow has a plan, but Slade's army plans to take the city tonight and it's bigger than they thought. Oliver and Diggle head toward the sewers to implement their strategy and Laurel insists on coming along. She wants to be his eyes and ears. Oliver tells her no. He tellls her that Team Arrow used to be just those three and it's time they got back to that. 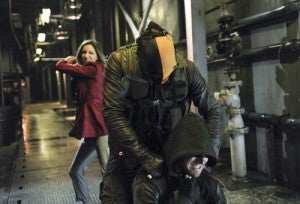 In the sewers, Oliver is walking around in shadows. Elsewhere, Blood puts on his Brother Blood mask to address the Mirakuru Army. While he's delivering a rousing speech, Oliver has eyes on the army. Diggle is on the street above, where he's about to blow a block's worth of concrete on top of them and kill the whole group. Before he can make an escape, though, Oliver is spotted by one of the Mirakuru-powered guards. The two fight in the hallway while Blood rallies the troops and the guard gets the better of Oliver -- but is distracted from behind by Laurel. When he turns to kill her, Oliver hits him with an explosive arrow. Diggle is about to blow the street when he's attacked by Isabel, dressed as Ravager and telling him that she plans to kill him for "killing" her. At the police department, an Iron Heights escapee who had been brought into custody breaks out of his handcuffs, puts on a Deathstroke mask and goes after Lance. At the train station, police and guards around Thea are taken out by two more Mirakuru soldiers in Deathstroke masks. In the van, Felicity gets a call from Cisco Ramon. Oliver and Laurel are cornered in the sewer, but Oliver blows one of the charges above, blocking the Mirakuru army off from them. In the flashback, the sub is freed, but on the other end of the radio, Sara has been taken. In the current day, Slade's Mirakuru army are making their way through the city streets.