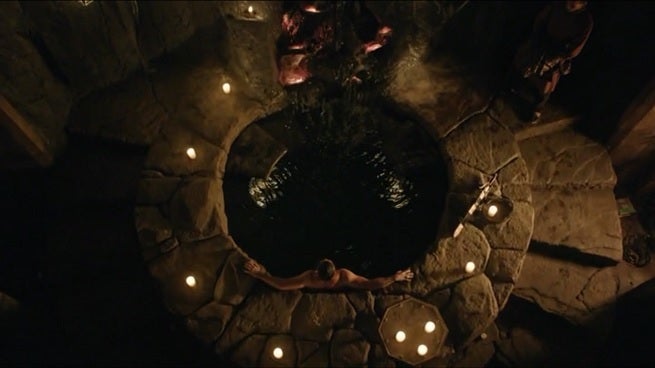 It seems that Arrow may be introducing the occult side of the DC Comics Universe to the CW's shared television universe.

"All year long we've been teasing what comic book fans know as the Lazarus Pit. We'll learn a lot more about that in 316," Guggenheim tells THR.

Guggenheim goes on to say that the Lazarus Pit, which has so far been seen but not named on Arrow, signals a shift similar to the introduction of superpowers into the world in Season 2.

"The world of magic fits pretty well into the world of Arrow," said Guggenheim. "We've already seen superpowers on the show. Once you've seen super powers, the occult and magic — that actually fits better in Arrow than superpowers."

It's still unclear if this means that Ra's Al Ghul is immortal or simply a title passed down from one leader of the League of Assassins to the next (the name translates to "Demon's Head"). It may be both, or something in between. Oliver Queen is now considering taking that position, and Stephen Amell hints that, if he did, he would be taking the title of Ra's as well.

"The League operates the way that Ra's wants it to operate — whoever Ra's is. So if you want them to stop killing, they stop killing," Amell says. "Whether or not that's true, remains to be seen. I would say Ra's in the beginning of episode 16, makes a pretty good sales pitch."

Arrow airs Wednesdays at 8 p.m. ET on The CW.

Arrow Will Explore The Lazarus Pit In "The Offer"