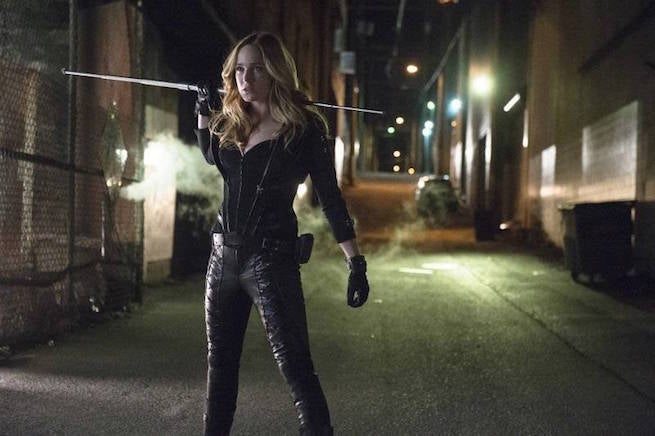 During a recent panel appearance at Fan Fest 2015, Arrow's Caity Lotz was asked about the future of her character and, as you'd expect, both addressed and attempted to avoid addressing the planned spinoff series in which she's been cast.

The series, which will reportedly star Brandon Routh, Victor Garber and Lotz as well as three new superhero characters yet to be cast, is still officially in early development but is expected to go straight to series, bypassing a pilot and coming to The CW in 2016 with a 13-episode order.

"Sara Lance definitely died in Episode 1 of Season 3 -- oh, spoiler alert! Sorry if you're not caught up," she joked. "And then...has anybody heard about the spinoff? So there is a new show in development and I'm so excited to finally be able to talk about this. The Atom, Firestorm, my character and, so I guess that is a big thing that's going on and everyone keeps asking me when they see on the Internet, 'Well, you're dead. How are you going to be in the new show? Is it just going to be flashbacks or are you playing a whole new character? Are you Sara Lance? I would love to tell you, btu I think they might kill me."

When the moderator suggested to her that nobody really stays dead in comics anyway, Lotz added, "How many times have I died already? Sara Lance has died, I think three times, so you never know."

You can check out the full panel below; she discusses the spinoff around the 3-minute mark.

The one thing that stands out there is her reference to"my character," which seemed like she was talking about Sara Lance, her existing character. That may be reading too much in for comfort, though -- or she might have chosen that phrasing for exactly its ambiguity.

The spinoff...well, that's yet to be determined, but the rumor is that it will be prepped as a midseason series next year.

Arrow's Caity Lotz Confirms Her Involvement With Spinoff, But Can't Say How She's There

Why WWE Fans Can Expect More Gimmicks Like The White Rabbit