After introducing Oliver Queen as a hooded, bow-wielding vigilante in Season One who takes on a number of colorful antagonists reminiscent of DC Comics supervillains while on a killing spree to make up for his father's sins, the second season of Arrow opened up the world of the DC Universe in a big way, while pointing Oliver toward a more heroic destiny.

As "The Arrow," Oliver didn't kill unless absolutely necessary and chose to spare the life of the most dangerous man he'd ever known at the end of the season, following a massive, almost operatic battle between a handful of DC Comics factions.

So...what's next? Arrow Executive Producer Marc Guggenheim joined ComicBook.com and a handful of reporters for a roundtable during Comic Con International: San Diego this summer to talk about it.

What are you doing in Season Three that's different from the first two years? 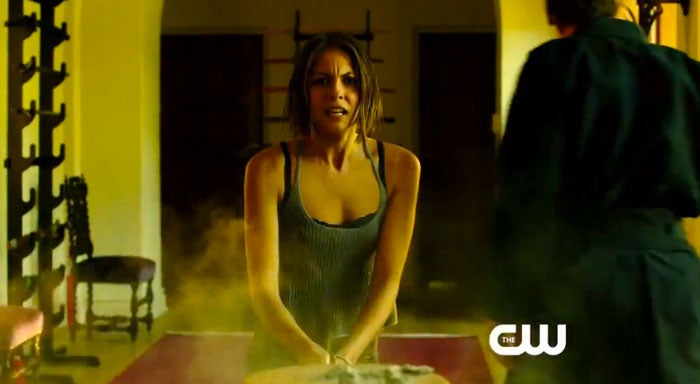 The best way to put it is, we're trying to take some of the lessons we learned from Season Two and trying to apply it to some of the cooler aspects of Season One.

We felt like Season Two was very successful. We do feel like it was an improvement over Season One and I think a lot of fans and a lot of critics felt the same way but there were elements of Season One that just because of the nature of the story we were telling in Season Two, we were lacking.

Such as -- Season One had a really cool, over-arching mystery. You had the glyph, you had The Undertaking, you were kind of wondering what was going on. There was what we called in the scripts the Well-Dressed Man, who turned out to be Malcolm Merlyn. And we wanted to basically take the epic quality of Season Two and fuse it with the mystery of Season One. 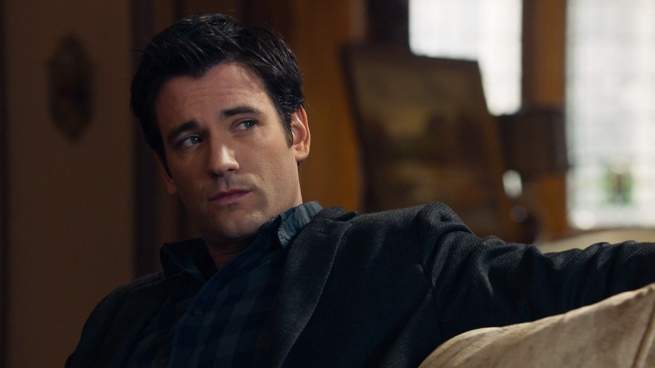 We've seen some characters come and go, and we hear that Tommy is going to make a dream sequence appearance...

Not a dream, a flashback, but yes!

Sara's gone. Might she be coming back as well?

Sara's back. Caity Lotz is in a recurring role. We've made a deal for three episodes but at current count, we're going to have her in for five, at least. Obviously with all of our recurring cast members, we always have to work around their schedules but we love Caity. We have really cool plans for her.

One of the things we're dying to do -- we don't know what episode it's going to be in -- we're dying to do a flashback story that basically takes Sara from the downing of the Freighter in Episode 2.23 all the way up to her time with the League of Assassins. So it would be how she met Nyssa, how she met the League of Assassins and her evolution into an assassin. That is something that's always been on our wish list.

One of the things we do enjoy about the show is that we have a large ensemble plus a large ensemble of returning, recurring actors. It's funny, when Colin Donnell filmed his death scene for episode 1.23, I went up to him and said, "I'm so glad that we do a show that uses flashbacks," and we are finally paying that off and it's really going to be fun to see Stephen and Colin share the screen again together in something that's not a hallucination. 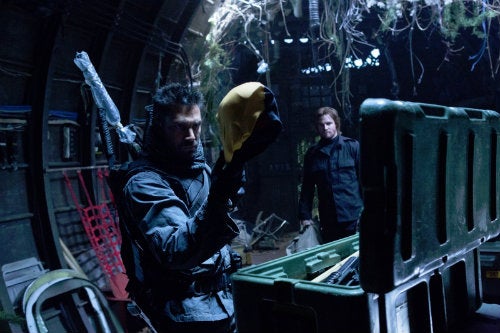 How about Manu Bennett?

Yeah, Manu actually falls into the same category. We've got an awesome story for Slade Wilson. Obviously we didn't kill him off at the end of Season Two and it's just a matter of syncing up our schedule and his schedule and our creative timeline with his schedule, so we'd love to have him back on the show.

Do you feel any need to have the show go darker or have it be a bigger contrast to The Flash now?

No, it's funny, we don't -- but we have talked a lot in terms of how dark the flashbacks should be relative to the present day stories. As we go lighter in the present day because of Oliver's journey to being a hero, we feel an obligation to sort of balance the show out by having flashbacks that are a little bit darker in tone.

You talked about the ensemble cast -- you've had so many great female characters. Can you talk a little bit about how that was approached? 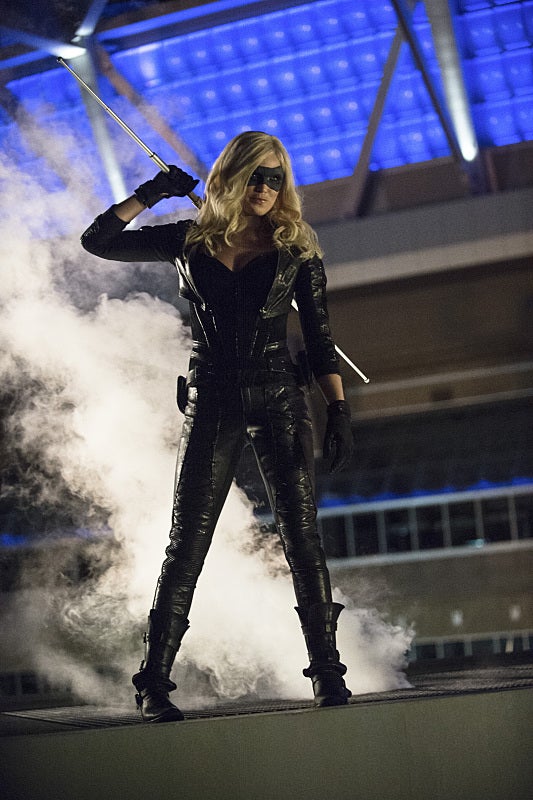 One thing that we've really strived for in the show is diversity of all forms. We're very proud of our racial diversity on the show, we're very proud of our gender diversity and having female characters who aren't just sex objects, who have agency, who are tough. I mean, Felicity Smoak is by no means an ass-kicker, but she's very tough and she has an inner steel to her. Same thing with Thea.

This year obviously Thea's going to be going through some changes because of her association with Malcolm Merlyn and that I think will bring her into more of the ass-kicking side of the spectrum, but as Malcolm said to her in Episode 23 [of Season Two], she has real steel in her; there's real iron in her. And Moira. We try with all the female characters to give them a strength but not make that strength limited to kicking ass, though we have plenty of that, obviously. I think people will be very happy with Laurel's trajectory specifically this year in that regard. She's going to start trying to walk the path that her sister walked, which is something we set up in the Season Finale and I think people are going to be really excited to see where that goes.

Can you tell us where Thea is going? There are so many Arrow sidekicks that she could be...

Well, I think it's safe to say that this year is going to be a battle for Thea's soul, so it's not necessarily going to have a happy ending to it. Certainly there is the potential in her name and we've been calling her "Speedy" since the pilot, but one of the things that we like to do is play against that expectation. So hopefully the ups and downs of Thea's arc this year will be compelling but also surprising. 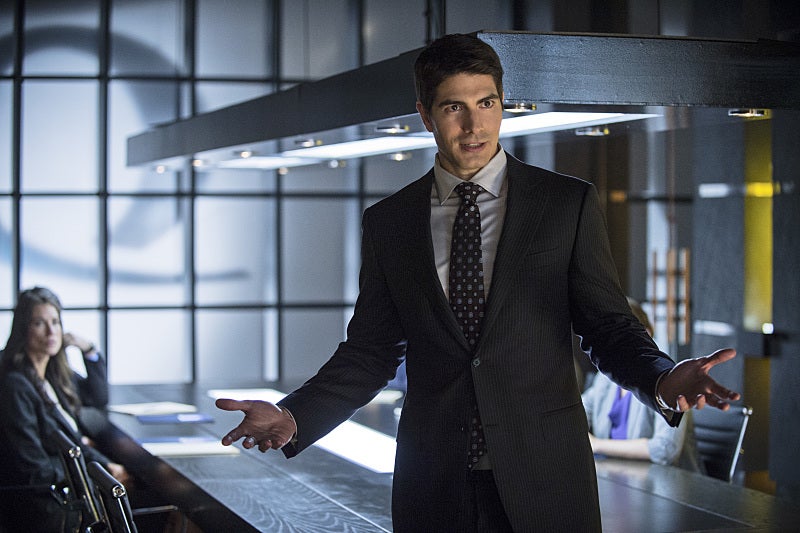 Can you talk a bit about bringing in Brandon Routh as The Atom?

We never start with, "Oh, this is an actor." We always start with the character first.

And we basically went into Season Three with a couple of models in mind in terms of, on the third season of Everwood, Greg [Berlanti] brought in Scott Wolfe and really shook up the show. Third season of Buffy, Joss Whedon brought in Eliza Dushku and really shook up the show. The idea of a new character coming in and being a change agent for a set ensemble was very appealing to us. That was one parameter. Another parameter was that we had Felicity and she sort of, from a dialogue perspective, lives in a different world than everybody else. We've been saying that Emily from a witty banter perspective has been playing tennis against the wall and we wanted to give her a tennis partner.

So through that, the character of Ray Palmer started to evolve and then we just started meeting with and auditioning actors and Brandon expressed an interest in sitting down with us. We couldn't have been more thrilled. I have to say, that meeting just blew me away. I was just so entranced by him, quite frankly. He's such an incredibly nice guy, he has remarkable screen presence and takes adjustments as an actor, like an incredibly finely tuned instrument. I mean that as the highest compliment. He really can give nuance to every line and you really can fine-tune it and it's a real privilege to work with him. And his scenes with Emily are just so much fun -- they're everything I could have hoped for. We're trying to write a little bit of a Spencer Tracy/Katharine Hepburn kind of relationship and that's something that's very much in our wheelhouse and it's just fun to see it come to life with Emily and Brandon.

We have a really cool plan in mind for Brandon and he's game. We told him the very first day where we were headed with him and he's excited and we're excited, too.

Arrow's Guggenheim on Season 3: We Wanted to Fuse the Epic Quality of Season 2 With the Mystery of Season 1