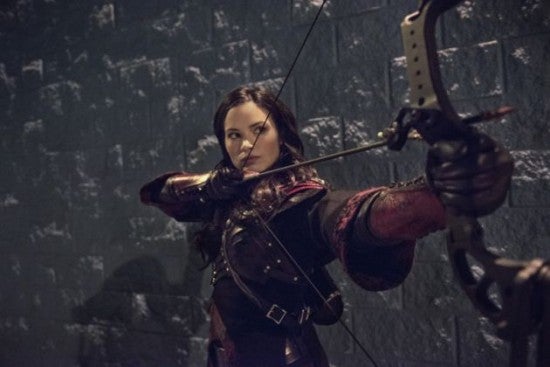 As part of a wide-ranging Q&A yesterday in Burbank, Arrow guest star Katrina Law, who will play Nyssa Raatko (the daughter of Ra's al Ghul) in tomorrow's episode "Heir to the Demon," joined executive producers Andrew Kreisberg and Marc Guggenheim to talk about the episode, Nyssa's impact on the series and the future of both her character and Arrow in general following an episode that star Stephen Amell says will take the series to another level. Obviously, Ra's al Ghul has been in the background all season long--so what made the showrunners decide to use him--or rather, his daughter--right now? Read on, and be on the lookout for more from the interview in this space throughout the day tomorrow. 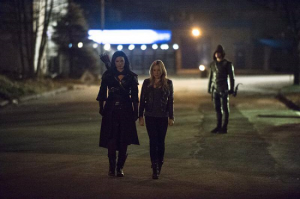 Can you talk about bringing Nyssa to Starling City and what this means for Sara and for the series? Andrew Kreisberg: Obviously, Nyssa is Ra's al Ghul's daughter. Second to him, she's one of the most important figures in the League. They sent their first round of minions to come for Sara and that didn't go so well for them so now they're bringing out the big guns. The way Nyssa comes into the story is in a far more provocative and surprising way than the last round came in in episode 205. How did you decide this was the right time to pull the trigger on Nyssa? You've talked about Ra's al Ghul a lot. Kreisberg: DC has been really amazing about letting us open that playbook. 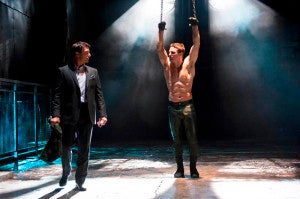 It really all goes back to Merlyn because Malcolm Merlyn, in his origin, he's part of the League of Assassins. Even though a lot of people associate Ra's al Ghul with Batman--which is true because that's where he started--he really encompasses a lot more than that. So to have our primary villain--to not be able to discuss where he came from? Geoff Johns and everybody at DC agreed that that was such a big part of it. I think now that the Dark Knight movies have been completed and those stories are wrapped, that has allowed us to open it up. As we always do these things, we take and we put it through the Arrow lens and do it in a new way. Finding somebody like Katrina to fill the quiver... Marc Guggenheim: We should clarify that Merlyn on our show is a member of the League of Assassins but also Merlyn in the comic books is a member of the League of Assassins. So the comic books made this possible for us, in a way. Katrina, you're playing a character who hasn't been seen in other media before. The fans are excited, but you don't have the expectations of, say, a Talia. What's that like? 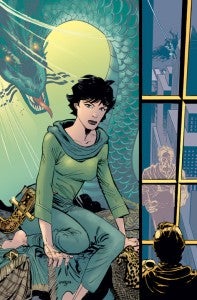 Katrina Law: I love it! I love the fact that she hasn't been in any movies and interpretation is left wide open between the writers and myself and what we want to do with even everything down to how she looks and her costume. Everything is just creative. I love that she's only been in the comic books I think a total of nineteen times and I think it was in "Death and the Maidens" or something like that. Everything about her is wide open so the fact that she could have a British accent...all these things is so much more fun than having something that's rigid and defined for you that you have to play within the confines of a box. So I love it. Accents are just more fun. Period pieces, costumes, it's just fun. As an actor, you want to play and to be able to take on all these different things...the first time I put the costume on, I had this moment where I just kind of geeked out in front of myself in the mirror. It was so good. Kreisberg: Maya Mani is our costume designer, and every week we're like, "Hey, can you do a costume for this incredibly iconic comic book character that feature films have years to devise?" and in a week we have yet another amazing costume that you can't imagine the show without. Law: Maya was great. Kreisberg: She loved you. The whole crew--the stunt guys were out of their minds. Law: James Bamford is amazing! And then my stunt double Atlan--this woman is so strong, I can't even tell you what an amazing stuntwoman she is. She's what? Cirque du Soleil? Kreisberg: She was in Cirque du Soleil. I will give Caity Lotz props; she did the first two rungs on the salmon ladder...but that's Atlan going the full ten. Law: Yes, Atlan is amazing. Guggenheim: But you ended up doing a lot more stunts than we would normally have an actress do. Atlan would usually end up doing more but you came in with all this experience and all this expertise. Law: I love doing my own stunts and the fact that I have this character who's kick-ass and legitimately trained was a lot of fun. It was also a lot more stress because I don't know how many of you saw Spartacus--with Mira, she was untrained so she could be wild and kind of throw herself at things whereas this girl, she's precise and everything that she does has a purpose and an intent so trying to make sure that my movements were sharp was probably the biggest stress. Other than that, the stunt team was amazing. James Bamford took great care of me; he broke everything down, made it simple for me and fun. It's just a lot of fun. Were you surprised to find out you'd be an archer again? Law: No, it was like putting on an old pair of shoes. It was fantastic.