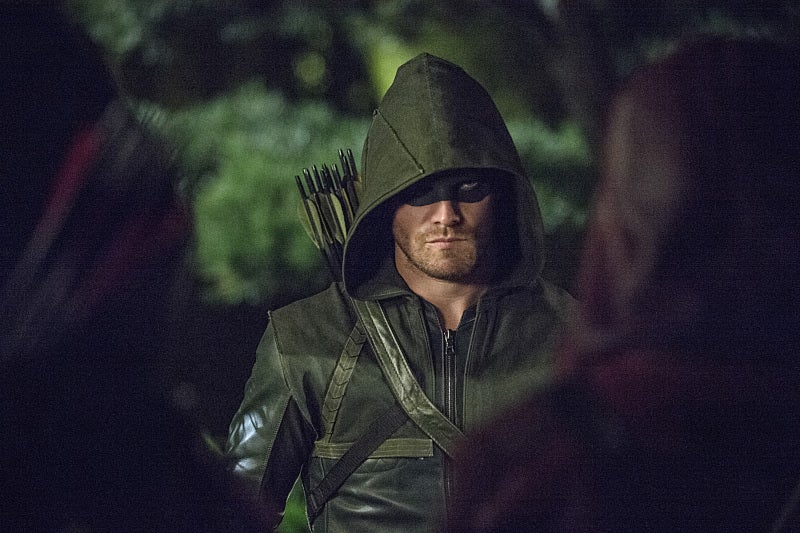 This week's episode of Arrow, "The Magician," was the fiftieth in the series' history.

Much was made of this, both inside and outside of the production. The episode saw Green Arrow's comic book nemesis, Merlyn the Magician, return from the thought-to-be-dead to antagonize Arrow for the first time since Season One (at least as far as Oliver knows) as well as introducing Ra's al Ghul, this season's big bad and probably the most-anticipated new character since the show began.

Before the episode went on the air, Amell took to Facebook to talk with his fans about the importance of the road to fifty episodes.

Facebook... Let me take a second and talk about tonight's episode.

First of all, it's our 50th episode. I know Supernatural just celebrated their 600th episode... that notwithstanding, 0 - 50 episodes is (probably) the toughest trek a television program can make for a variety of reasons. Most of the reasons are anecdotal business-y things that will literally make you fall asleep at your computer. So we'll focus on the important reasons / questions.

What if David Ramsey and I hated each other? There is no way - in hell - we make it out of the first 13 episodes if he and I couldn't negotiate 15 hour days in the Arrow Cave with a smile on our face.

What if we got preempted in Chicago all the time? (Sorry... I had to.) I love you Chicago. Watch the show this Sunday!! Hope the Bulls win tonight.

What if John Behring hadn't been available to direct our 6th episode? A spot he nailed so spectacularly that we immediately booked him for 80% of our landmark episodes over the next two years.

What if Caity Lotz's Mad Men character had hopped into bed with Don Draper like EVERY OTHER WOMAN ON THE SHOW and she wasn't available to make our world three-dimensional with one of most badass superhero portrayals - male or female - ever? (Miss you, Caity.)

And what if our show runners didn't have testicles the size of Diggle's biceps and a stunning willingness to tell a story the way people in 2014 want to consume it. Go go go go GO GO GOGOGOGOGOGO!!!

For all the planning that goes into a pilot, there are a thousand variables that push you from that point to the point we're at right now and you need just about all of them to break your way.

Tonights offering is my favorite episode we've ever done. Why? Because it has a maturity and a richness of storytelling that takes 49 episodes to produce. I really hope you enjoy it.

We're honored to present it to you.