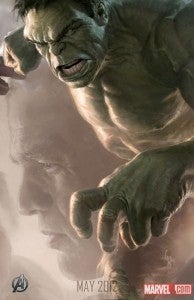 The first preview of the upcoming Avengers movie came at the end of Captain America: The First Avenger. The brief footage showed only a glimpse of the main characters, leaving little to go on as to how good or bad the movie would be. At Disney’s D23, a longer clip of Avengers movie footage was shown, and based on early buzz, it’s looking like the movie is going to be a winner.

Not since the first Iron Man movie trailer was shown at the 2007 San Diego Comic Con has footage from a superhero movie generated so much excitement. While no bootleg copies of the actual clip have made it online yet (as Disney security was evidently pretty strict about not allowing electronic devices inside), there have been several recaps of the footage. Marvel Comics even had a live blog for the event.

The Avengers Movie footage started off with some witty banter between Loki (played by Tom Hiddleston) and Nick Fury (played by Samuel L. Jackson). Loki is imprisoned in a glass cell dangling above a hole in the bottom of a S.H.I.E.L.D. helicarrier. Fury threatens to just drop Loki and send him hurtling to his death 30,000 feet below, but Loki is not intimidated. Loki talks about having real power, and Fury quips, “Let me know if real power wants a magazine or something.”

After this scene is some action footage, which includes Thor and Captain America apparently fighting and Hawkeye firing an arrow. But the scene generating the biggest buzz actually comes after the action. Tony Stark (played by Robert Downey, Jr.) is shown mixing a drink behind a bar. He describes his teammates as a couple master assassins, a demigod, and a living legend who kind of lives up to the legend. Stark adds, “And you, big fella, managed to piss off every one of them.” It turns out that Stark is talking to Loki, who responds, “I have an army.” Stark retorts, “We have a Hulk.” The footage then ends with a close-up of the Hulk letting out a huge roar.

With most superhero movie footage, there is huge debate among those who found it amazing and those who were disappointed. What’s amazing about the Avengers footage that was shown is that everyone who saw it has been giving overwhelming positive feedback. For the first lengthy trailer footage for the Avengers movie to give fans exactly what they want to see is a promising sign the Marvel Studios could have one of the biggest blockbusters ever on their hands.