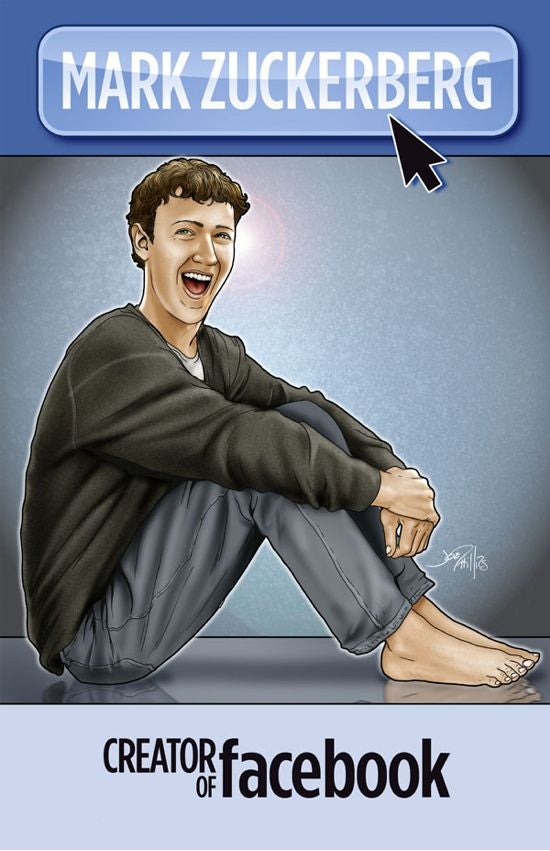 Bluewater Productions has released a new version of their popular Mark Zuckerberg: Creator of Facebook comic book. Their original Mark Zuckerberg biography comic book sold completely out on its very first day of release. The new Mark Zuckerberg comic book is actually a 48-page graphic novel, which is more like a book version with a spine rather than the traditional comic book format. The new Mark Zuckerberg comic book also has a brand new cover which shows a smiling and barefoot Mark Zuckerberg. Mark Zuckerberg: Creator of Facebook is written by freelance journalist Jerome Maida and illustrated by Sal Field. According to Bluewater, the Mark Zuckerberg comic book offers a more balanced portrait of Facebook's founder than the recent Oscar-nominated movie The Social Network. In addition, the new version of the comic includes expanded story content, pin-ups, and other illustrated extras. "There was a lot of buzz regarding this particular title outside the traditional comic book buying demographic," said Darren G. Davis, president of Bluewater. "Facebook fans and Zuckerberg detractors have sought this title out, so I am hoping we earned a 'Like.'" The new cover is drawn by comic book artist Joe Phillips, and book has suggested retail of $10.99. It is available in print through traditional retail outlets such as Barnes & Noble and Amazon.  E-Book versions are now on several online venues including Kindle, I-Tunes & Nook.