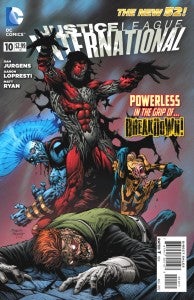 Yesterday's tenth issue of Dan Jurgens and Aaron Lopresti's Justice League International was a plot-heavy, villain-filled extravaganza that saw the JLI facing off against The Burners, a group of villains that we've already seen in action but never all together at one time. Like last arc, when they faced off against Peraxxus, the team has been experiencing some growing pains and having a little trouble figuring out how to work together as a unit, but when it comes down the actual back-to-the-wall action scene, they acquitted themselves pretty well--mostly. With Guy and Booster leading the charge, the villains had as much trouble working together as the heroes did and it took most of an issue before Intersek, who can disrupt communications networks and therefore more or less shut down any electronics, figured out a way to even the playing field a bit and set up the big cliffhanger for next month. Jurgens joined us to talk about the issue; remember that as always, this is intended as a kind of commentary track of companion piece to the issue and contains spoilers. It's been uncommon for characters--even the ones who you obviously enjoy writing--to get more than a couple of pages of narration if they aren't Booster or Batman. What made you decide to go with August General as the POV character for this issue? As we're moving through the current story, each member of the JLI will get a chance to be the POV character. It's a nice device that allows us to get inside the head of the team's members. It can be a bit more revealing than having the same character do it all the time. I 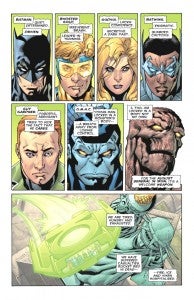 s there a bit of a Hulk/Thing dynamic being set up between the General and OMAC? I mean, OMAC can change back periodically, even if the monster still tends to take control and ruin stuff--whereas the General seems pretty comfortable with resigning himself to things, but maybe that's because he has to be, right? I mena, he doesn't get time out of the suit. Maybe a little bit. The basic difference between the two is that OMAC doesn't want the change and is afraid of the monster that emerges from time to time. The August General has accepted his change and perhaps even embraced it. If anything, he may have become more reserved. The General sees the tactical advantage his new form brings him while OMAC wants out of the whole situation. Not to be too direct, but does Malik have powers of his own? Stay tuned! That said, if he did have powers, it seems like his military background would make him an ideal candidate for something like the JLI. Hmmm... that's some good, sound reasoning. Once again-- stay tuned! It seems like having a character who's the twin brother of a cool, new villain available to be a hero is a really tempting way to get a new, minority character into the mix. What do you think of the whole notion of swapping an existing character's race of sexuality or whatever in the New 52? 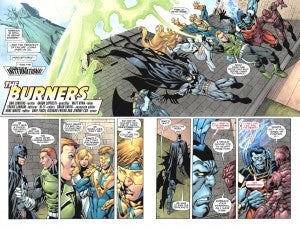 I think it's to everyone's benefit to have a more diverse cast of characters. It's a big world out there, with many different types of people and that should be reflected in the publishing line. I understand the the goal in making changes to pre-existing characters. At the same time, I wonder if some groups wouldn't rather have an all new character devoted to them so that they can more fully embrace him/her as their own. Speaking of--you know, with Lightweaver creating a giant evil rainbow light monster the same week as the Alan Scott thing happened, you could get letters! Never made that connection, but you might be right! Fire and Ice seem pretty deep into a coma, Mari can't walk, and it's been a while since the attacks. Will we get resolution on what happens to them by the time the series ends? We'll try to resolve as much as possible. While it's been a few issues, the actual amount of time has been quite short. Godiva, meanwhile, is advocating for we Booster fans a little, suggesting that she needs to get a look at Skeets. Was that tossed in after you realized you probably wouldn't have time to write him in to a future issue? No. At the time that issue was written I was unaware of that, and plans for Skeets were pretty much planned out. I've been recognizing more of Aaron's elaborate designs on the power ring structures and stuff like that lately. Any idea if this dino-monster-man thing is a specific callback to an existing character or concept? No. I always try to set things up that give Aaron something visual to play with, while also being something somewhat fresh for Guy. It's either that or resort to giant boxing gloves and clothes pins. Man, Intersek is really lucky. Not only can she control future tech that hasn't been invented yet, but how can her power set affect the power ring? Just a leap of faith? I don't think it's a question of controling future tech or the ring. What Intersek can do is block communications. In both cases, there's a communication link between the brain, nervous system and rings or costume in question. She can sever that communication.

Dan Jurgens on Batman, Booster Gold and the Justice League International vs. The Burners