If your friends are anything like mine, sometime over the last few days you've seen a fan-created comic book called Batman: The Deal a number of times on social media.

Created by Gerardo Preciado and Daniel Bayliss and posted online last week, the story is their ultimate take on Batman and The Joker's love-hate relationship, not entirely unlike the way their relationship was depicted in The Dark Knight or Scott Snyder and Greg Capullo's recent Death of the Family storyline.

The story is punctuated by a lengthy quotation from stand-up comic Bill Hicks, a kind of philosophical monologue that gives a unique take on the never-ending struggle between the pair.

We caught up with Preciado and Bayliss to discuss the story, which you can read at the link above. 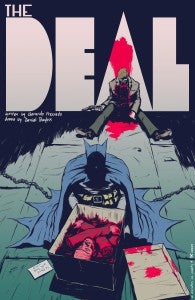 ComicBook.com: It's always interesting to me when somebody who obviously has a ton of skills opts to use them not just on a property somebody else owns, but also on a version of it that'll never see official publication. What made you guys want to do Batman in this way?

Gerardo Preciado: We've been working on short stories featuring our own characters, and we had never even thought of doing any mainstream characters, we were on a break from one of those stories and I had an idea for a Batman story, Daniel liked it, and we just did it for ourselves, really.

Had I known that so may people would see it, I may had changed a little bit here and there, but at the end, art is never finished, you have to let go, otherwise you can never move on to the next thing.

Daniel Bayliss: Oh! If we knew that, I would spend a lot more time on those lips fore sure, they need way more wrinkles.

ComicBook.com: How'd the Bill Hicks connection come about? Was it one of thsoe things that started from the conclusion and you built the story around that?

Preciado: That came at the very end, I didn't want to explain anything so originally there was no dialogue on those final pages, but there was something missing. That whole monologue it's been a favorite of mine for a long time, and it was weird that it dawn on me that it was perfect for the story so late in the process, I didn't edit anything out because that man is a genius.

At the end the whole idea was that it should work on many levels, I wouldn't like to give my point of view on what it means, because I think that whatever the reader thinks it means, that's it. The Bill Hicks quote added a whole new dimension to the story.

ComicBook.com: The art in this book is terrific; a lot of people have compared it to Paul Pope, but I also see Chris Brunner, who's a personal favorite. Who are some of you guys's favorite mainstream creators?

Bayliss: Paul Pope is one of my favorite artists, so that is just flattering for me, not sure how he would feel about it if he ever see this. Chris Brunner is incredible, so I appreciate the connection there, but I never think of him as an influence until now that you mention it. Rafael Grampá, Francesco Francavilla, Brandon Graham and Simon Roy are some of the artist I keep on looking right now.

Preciado: My all time fave is Mike Allred, I've been a fan since Madman Comics back in the 90s. One of my favorite books if not my favorite is "I Shall Destroy All The Civilized Planets" by Fletcher Hanks, the art on that book is insane. Also, when I was growing up I wanted to be John Byrne. But honestly, working with Daniel is a privilege, he's got the potential to be one of the greats, he's just getting started. 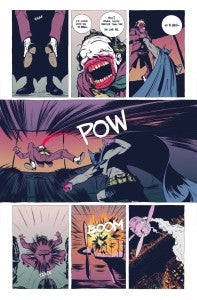 ComicBook.com: Was it kind of strange to suddenly have thousands of people sharing your free comic around? I mean, based on what I saw going across my social media, I'd say your fan fiction story actually got seen/read by more people than many smaller Big Two titles.

Preciado: It is very strange, the comic has over 1 million views from all over the world. It's being translated to German, French, Spanish and Portuguese as we speak. We've been surprised by the overwhelming positive response, even the people who hate it share it!

Bayliss: Well the subject of the comic is kind of polarizing so I guess that's what made it so much easy to spread so wildly, but by any stretch of our imagination we expected this reaction.

ComicBook.com: It's interesting that you dabble in some of the same themes as both The Dark Knight and Death of the Family, but in a very different way. Were you inspired by those things or is this very much just how you've always seen the characters?

Preciado: I was inspired by a short Wolverine story by Rafael Grampá on Strange Tales II # 1, its a short 5-6 page story but it's my favorite Wolverine comic ever, specially in this "handsome Logan" era. I thaought it was amazing that in a couple of pages you could tell so much about a character.

Oddly enough, as much as I love The Killing Joke or The Dark Knight Returns, I wasn't thinking about any Batman story in particular, I was trying to come up with something that I would want to read.

ComicBook.com: What's your favorite piece of feedback you've gotten as the comic has spread online?

Preciado: It's been amazing, from people being driven to tears by the story, to people making fun of the dialogue or art in very funny ways, its all good.

Bayliss: We have received so many positive feedback and some devastating too, and we appreciate it all. BUT, my favorite is some guy that compare us with an artist who put a Christian cross in a jar with piss! I mean calm down, you are taking this things way to seriously. 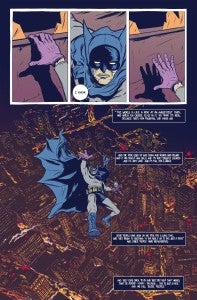 ComicBook.com: A lot of people shared "The Deal" with the "Read this before it's taken down!" warning. Did that even occur to you when you put it up on your blog?

Preciado: It never did occur to me until I read someone tweeted that, we saw it as a cover version of a band's song on YouTube, cosplay or something, we are not making a penny off this, if DC wants us to take it down, we will of course.

ComicBook.com: With the launch of the New 52 at DC, it seems like a lot of their writers are doing stuff like this; they're trying to do their "definitive" story featuring one or more of the iconic characters. Do you think it's easier or harder doing that outside of the realm of editorial influence?

Bayliss: Well its obviously easier if you are going on your own. The editorial influence is there for many reasons, and one is to protect the property of the company in the case of the New 52 it seems to me it was an editorial move to give the writers room and give some characters a fresh start. Anyway, writers agree to play by their rules and that's fine.

Preciado: There is a lot of backlash at Hollywood with all the remakes and stuff, but if you look at the state of comics, I think it's far worse; nothing ever changes. I don't like that. Of course there is always great stuff out there, but what I mean is, when Stan Lee created all those wonderful marvel characters in the 60's, he was coming up with them on a monthly basis, we forget that it was once all NEW stuff.

I would love to read what the amazing writers of both Marvel and DC would come up with if they could do anything they wanted with the characters.