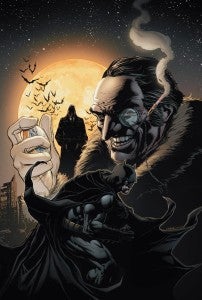 DC Comics has just announced via its blog, The Source, that Chew and Mars Attacks! writer John Layman will be taking over Detective Comics beginning with October's #13, along with artist Jason Fabok. Based on the cover released by DC Comics, it appears as though the first arc will revolve heavily around The Penguin, a character who has had a fair amount of exposure already in the New 52 in his Penguin: Pain and Prejudice miniseries by Gregg Hurwitz, the current writer on Batman: The Dark Knight. "Obviously, this is a happily surreal and exciting turn-of-events for my career," Layman told the blog. "Not only is this my first work within the DC Universe, but I get to work on one of DC's undisputedly coolest and highest-profile characters. I'm going to take a look at the role of criminal organizations within Gotham City, hopefully from a perspective that does not get considered very often (if at all). From the symbiotic relationship a master criminal must have with Gotham in order to survive, to the lowly, often faceless criminal underling hoping to rise up the ranks. All that, plus Batman's gonna play with a bunch of crazy new toys and kick all kinds of butt." Who'll be drawing those wonderful toys? Well, Fabok had a little to say about the direction of the series as well: "First, I want to express how thankful I am to have this opportunity. I am humbled that DC Comics would entrust me with one of their greatest titles. To work on a Batman title has been the number one goal that I set for my career and I am honored to have this opportunity to make my dream become a reality. I'm really hoping to deliver a dark, epic Batman with hints of the art deco stylings of the old animated series and the more modern take seen in recent incarnations. I am hoping to let my influences gush out onto the page and create something that is familiar, classic and yet my own. As for working with John Layman, I couldn't be more excited. John is a great visual storyteller and he packs every page with meaningful panels that bring the story forward and add incredible depth. Together we hope to deliver a quality Batman tale, filled with mystery, twists, turns, shockers and most of all, fun!" It was known that a change would be made soon; Bleeding Cool recently reported that Tony S. Daniel, who had been writing and drawing Detective Comics since the relaunch, would leave the title. While he reassured fans that he would remain at DC and would likely find his way back to the Batman books sooner or later, Daniel is quoted as explaining,  "My Batman/Detective Comics run is coming to an end. My final written (and drawn) issue is Detective Comics #12. I'll be producing the art only for issue #0. It's been a long and adventurous journey for me, but there are other projects in the pipeline that I've been itching to do and I felt the need to scratch the itch. Next week, DC will reveal some information on what one of the projects is I'm involved with. Then I'm gearing up for something I've wanted to do for a while in early 2013, a project where I hope to grow even more as an artist and a professional. It is top secret, and probably won't be revealed until the fall." Of course, the "next week" he's talking about may be this week (in which case expect news at DC's blog tomorrow) or next week at the San Diego Comic-Con International. Keep your eyes peeled, as ComicBook.com will bring you the news either way!

Manga and Webtoon Publishers Are Dominating the Comics Industry