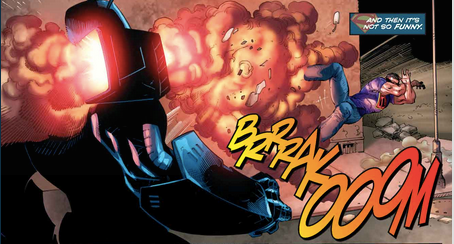 Before they duke it out on Batman Vs. Superman: Dawn Justice, The World's Finest are taking a few practices swings  at each other (for the 20th time) in the pages of Batman/Superman #21.

Arriving this June from DC Comics, the upcoming comic finds the former friends trading blows instead of friendly banter. But, there's an explination here. See, the guy in the bunny-bat-suit isn't Bruce Wayne, but Gotham City Police Commissioner Jim Gordon. Following The Dark Knight's apparent death in Batman #40, Gordon assumed the mantle of the bat as the Gotham City Police Department's "official" Batman.

And apparently, Gordon isn't liking what the newly de-powered Superman is selling (You'll have to check Geoff Johns' recent Superman issues for more on that one).

Enjoy the big screen preview in the gallery below—and just wait until you see another Dawn of Justice character make his entrance. Could we be looking at the World's Foulest team-up?