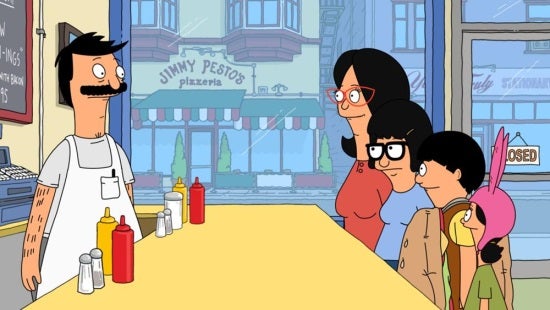 A new episode of Bob's Burgers, titled "The Kids Run Away," will air tonight on Fox. In "The Kids Run Away," upon learning that she has a cavity and needs a filling, Louise runs away from the dentist's office and seeks refuge at Aunt Gail's (guest voice Megan Mullally). When Louise refuses to go home, Linda sends Tina and Gene to join her and bets her that she won't last the weekend with Aunt Gail's "craziness." The voice cast includes H. Jon Benjamin as Bob; Dan Mintz as Tina; Eugene Mirman as Gene; Larry Murphy as Uncle Teddy; John Roberts as Linda; and Kristen Schaal as Louise. Guest voices include Megan Mullally as Aunt Gail and Ken Jeong as Dr. Yap. Bob's Burgers, "The Kids Run Away," airs Sunday, April 27 at 7 PM ET on Fox.