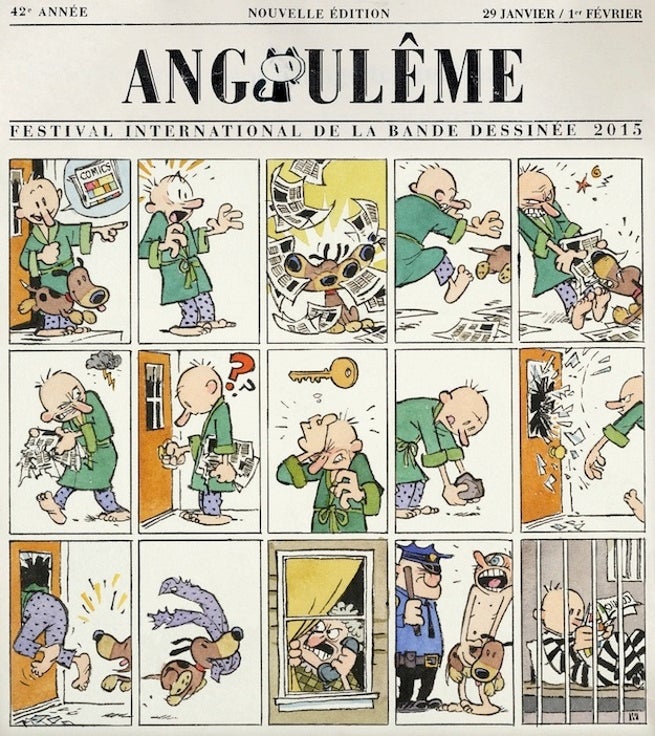 In an interview with the French website 20 Minutes, Calvin and Hobbes creator Bill Watterson unveiled his poster for the 2015 Angoulême International Comics Festival (via Robot 6).

Watterson was awarded the Grand Prix d'Angoulême at last year's event, which usually comes with the added honor of being president of the following year's festival. The notoriously reclusive Watterson will be declining that honor, and will only participate by designing the poster and sending along a few pieces of his artwork for an exhibit.

"To be honest, the world of festivals and their awards is very far from my daily concerns," Watterson said. "But I'm still flattered that people continue to appreciate my work."

Watterson designed the poster because he saw it as a challenge, choosing to use the comic strip form that he is best known for, and to leave the strip silent to avoid having to deal with the language barrier.

"Telling a story solely in images is one of the great strengths — and the great pleasures — that comics have to offer," he said. "In this way, I hope I have succeeded in expressing both my own work and comics in general. And to pay tribute to that which makes this medium so pleasant to read."

The Angoulême International Comics Festival is the third largest comics festival in the world. The event has taken place in Angoulême, France every January since 1974. The 2015 festival begins January 29.