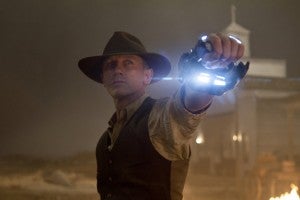 In an extremely disappointing opening, 'Cowboys & Aliens' tied 'The Smurfs' at the box office over the weekend. Official numbers are out this morning. 'Cowboys', the big budget film directed by Jon Favreau and starring Daniel Craig and Harrison Ford, had initial weekend estimates coming in around $45 million. Unofficial weekend numbers put the take at $36.2 million. Reviews of the film were all over the place. Our own Nick Winstead wasn't a huge fan, though I thought the film was incredibly entertaining. The opening take doesn't bode well for original comic book films in the future, as it might cause studios to pass on lesser-known properties and go for more of the sure bet. 'Cowboys' cost $163 million to produce. And while user reviews were solid and the film should have decent word-of-mouth, it will be tough to make up those production costs and turn a profit on this film.

Color Me Blue: 'Cowboys & Aliens' Ties 'The Smurfs' At The Box Office