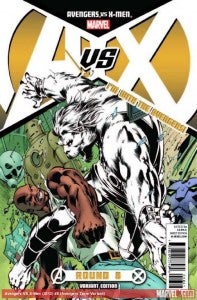 Howdy readers!  Well, Russ, Z.D., and I are officially back in our respective home states, excited yet exhausted from our coverage of San Diego Comic-Con 2012.  It was an amazing trip, and comicbook.com will definitely be taking a return trip to the con next year (right, boss?).  With all that said, it's time to get back to our regularly scheduled jobs here, and mine is giving you all the word on the hot books that will be landing in stores this week! Sit back, relax, and enjoy the browse through the books that everyone will be reading and going after this week! Marvel Avengers vs. X-Men #8  We're over halfway through this big event, and in this issue Namor goes off against Wakanda.  Will this act of aggression divide the X-Men and give the Avengers the advantage? Avengers Academy #33  It's a school of future Avengers and mutants versus the White Queen.  See who remains standing. Captain Marvel #1  It's a new era, a new costume, and a new direction for Carol Danvers, with writer Kelly Sue DeConnick guiding the reins! Fantastic Four #608  It's also about Wakanda in this issue, with the role of the country about to change in a big way.  Plus, who is the Black Panther? Uncanny X-Men #16  More Avengers vs. X-Men crossover here!  Get it while you can, from all angles! Invincible Iron Man #521  War Machine, Rescue and IM2.0 go after Tony starts building the Mandarin's weapon X-Men #32  Storm's had her own team going for awhile now, but how much longer before Cyclops wrests it from her? DC Comics Batwoman #11 The end of the "To Drown the World" arc is here!  The fate of missing children hangs in the balance as several of Gotham's forces collide in this finale! Legion of Super-Heroes #11  C'mon, you already know what may happen here.  You don't? Check out our exclusive preview of the issue here! Wonder Woman #11  Now that Diana has left the Underworld, Apollo sets his sights on Zeus' throne.  Does he know Diana is in the way? Nightwing #11  An anti-Gotham group is on the rise, and Nightwing will have to take on their leader, Paragon, to stem the tide. Supergirl #11  Supergirl's powers continue to evolve, and by they way they manifest while she's on a date! Justice League #11  The Element Woman squares off against the combined effort of Aquaman, Cyborg and Batman here! Catwoman #11  Catwoman continues the hunt for Dollhouse, and her relationship with Spark takes a turn for the closer! Dark Horse Alabaster: Wolves #4  Dancy gets a close-up look at the evil that exists in town, and Maisie goes from Dancy's almost-killer to her ally. Dark Horse Presents #14  New stories of Alien, Mister X and Ghost are here, as well as the debut of Mike Oeming's The Wild Rover. B.P.R.D. Hell on Earth: The Devil's Engine #3  Fenix and Devon escape, but what will their explanation be for why Abe had to die? Reset #4  Guy Krause goes after the girl here, but will the time he spent on the Reset machine change him for the worse? Star Wars: Darth Vader and the Ghost Prison #3  Vader squares off against the Jedi guard and Trachta goes after a certain prisoner in this next chapter. Image Comics Glory #28  Glory's put a lot of people in harm's way recently, and her friends hold the key to stopping her, plus a new character to the Extreme universe. Skullkickers #16  Mermaid's Bottom has become the site of an ancient evil, and there's much more than that in this story's current arc! The Activity #7  A new story arc begins here with "Ghost Hunt", and real Navy SEALS help co-write this one!  Talk about source material! Top Cow: The Darkness #105  One of Top Cow's biggest series sees Jackie's life continue to crack, along with his wife's sanity. Boom Adventure Time #6  The fun in this all-ages title continues, and people just can't get enough, with sellouts continuing for almost each issue! Exile on Planet of the Apes #4  The last issue is here!  See how it all ends as the final loose ends are tied up! Snarked #10  So, the heroes have escaped, but the Red King has no idea who Scarlett is.  Oh, and he won't leave the island.  That's handy. Dynamite Entertainment Prophecy #2  The Mayan prophecy has arrived!  It is 2012 after all, and some of Dynamite's premiere characters are here to stop the end from happening! The Spider #3  Anput continues to battle New York, the Spider seeks to stop her in her tracks before more must suffer. Vampirella #19  Dracula is on the prowl, and it seems that Vampirella has even he friends stacked against her. Red Sonja #67  It's a new chapter here as Red Sonja begins her newest work-for-hire venture!