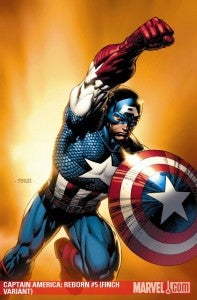 The holiday season is in full swing now, and we know you all are terribly busy, but we're so glad you stopped in between holiday office parties to check out this week's comic book previews! The gift that keeps on giving, Spider-Man's gauntlet, returns this week as he begins his face-off with a new and improved Sandman in the pages of Amazing Spider-Man #615. Captain America: Reborn reaches its conclusion in its fifth issue this week. Steve Rogers has returned, right...RIGHT?? What happens to the Red Skull, Steve and Bucky??? Find out as this major story ends and another surely begins! Its the rise of the Bio-Sentinels in Astonishing X-Men #33 this week, as the dead continue to rise around our mutant outsiders! Look for Namor and the Fantastic Four to make an appearance in Black Panther #11 this week, as the newest panther looks to dig her claws into the Sub-Mariner! Speaking of mutants, the premier mutant detective agency hits a milestone this week, as X-Factor #200 hits the stands! Look for an appearance from Franklin and Reed Richards as X-Factor search for a missing Invisible Woman! What's going on with Doc Samson??? Find out more in Hulk #18. Also, be sure to pick up your copy of Dark Avengers #12 as Norman Osborn and his team face off against the powerful Molecule Man! Ms. Marvel #48 sees the start of Ms. Marvel vs. Mystique; see what happens in the lead-up to the fiftieth issue!! 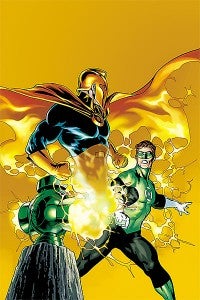 It's a Doctor Fate and Green Lantern team-up in this month's issue of The Brave and the Bold #30. Two powerful forces join together in this popular DC book! It's also a Bat-tastic week as several Batman related series and titles see the light of day this week. One of the biggest, literally, is Batman 80-Page Giant! This story sees the likes of Batman, Mr. Freeze, Catwoman and Alfred coming together to help the city when a massive blizzard grips it. Batman #694 and Streets of Gotham #7 both see the continuation and beginning of stories that focus on Black Mask and Arkham Asylum resident Humpty Dumpty respectively! Justice League of America #40 concludes the lead-up to the launch of a new team with the continuation of the Blackest Night tie-in! Pick up Power Girl #7 to see the return of a long-ago villain, and look for villain Silver Banshee to wreak havoc in the pages of Supergirl #48!

Image Comics brings us an exciting new issue of Elephantmen with this week's release of issue number twenty-three. Part eight of the "Dangerous Liaisons" storyline happens here in this Richard Starkings-penned series! A new limited series begins with the release of Forgetless #1 . This issue, the first in a five-part series, features dance clubs, models turned killers, and artists, all set against the backdrop of New York City! Image's Next Issue Project launches another release this week with Silver Streak #24. Their revival of Golden Age characters happens again here with another updated classic! Underground #4 takes us one step closer to the final issue in the five-issue series with this week's release. Dark Horse takes a week off in preparation for a huge week next week!

IDW brings us the latest issues in two of their popular series with the release of Doctor Who #6 and Locke & Key: Crown of Shadows #2. The Complete Alice in Wonderland #1 kicks off as a headliner for Dynamite Entertainment this week, alongside mainstays Project Superpowers: Chapter Two #5 and Thusla Doom #4. Boom! Studios brings another Mark Waid creation with the release of this week's Incorruptible #1, which spins out of the pages of the jaw-dropping series Irredeemable. Another new Boom series returns this week with the release of Nola #2. Continue reading the adventures of a heroine making her way in a post-Katrina New Orleans in this second issue! Also from Boom's kids' line comes Walt Disney Comics and Stories #701, where heroes The Duck Avenger and Super Goofy take flight! Also look for Uncle Scrooge #386!! Christmas is just around the corner! Be sure to stock up on stocking stuffers and more this week and next before the big day!