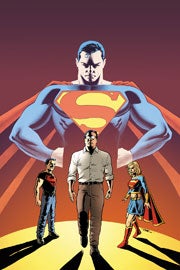 I know what you must be thinking. After last week's epic release of some MAJOR titles, MAJOR summer event books and several one-shots there can't possibly be anything this week that could pull you in, right? NOPE! There's plenty of good stuff heading into your comic book stores this week, and the good folks at DC Comics lead things off! Superman #713 sees the man of steel just not feeling the role, and Supergirl and Superboy are forced to track him down in Oregon to find out why! Over in Detective Comics #879, Commissioner Gordon continues to unravel the mysterious circumstances around his disturbed son James, and he might not like what he finds out! Also swinging through Gotham City, Batgirl #23 sees the dominoed daredoll squaring off once again with The Reapers, and maybe this time she'll be able to bring them and their nefarious plans down! Green Lantern #67 brings the staggering events of "War of the Green Lanterns" to a dramatic close, so you DON'T want to be the last one picking that up, right?? If you've been keeping up with the events of "Flashpoint", and of course you have, then you're sure to be curious about the newest issues of their tie-ins this week. First up is Citizen Cold #2 alongside Emperor Aquaman #2, which sees the aftermath of Aquaman's very personal loss. Will he take it out on the world that has already felt his wrath? Speaking of Aquaman, Deathstroke and the Curse of the Ravager #2 also ties in with the king of the sea, as Deathstroke finds Aquaman standing in the way of his coveted treasure! 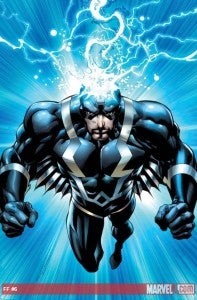 Marvel sees The King back in action this week, but he won't be singing "Blue Suede Shoes"! It's Black Bolt, of course, the king of the Inhumans, and he's right here in the pages of FF #6! He seeks to reclaim his throne, and NO ONE can stop him if he doesn't want them to! Speaking of familiar characters back in action, Ghost Rider #1 sees everyone's favorite blazing skull on wheels back in action, with the events of Fear Itself tying directly into this title. BIG BIG news for the mutants, as the major X-Men event "Schism" begins HERE! Schism #1 opens up the internal battle that splits the X-Men! Who will end up where? Start here and begin to find out. While you're at it, check out New Avengers #14, which sees a new character teaming up with the super group for the FIRST time! Find out who it might be, and be sure to Black Panther: The Man Without Fear #521, as the American Panther makes his debut! Is Hell's Kitchen ready for this new presence? Keep on reading, as Marvel's hot summer of titles and major events continues to heat up!! Dark Horse is number one this week, literally, as several series at that company launch with number one issues! First up is Dollhouse: Epitaphs #1, which continues the story of former Rossum Corporation member Alpha, as he must take on the role of trying to save humanity from themselves! Joss Whedon himself had a hand in writing this, so you know it's straight from his vision! Also this week is Star Wars: Invasion-Revelations #1 , which features a story set in the time frame of the New Jedi Order novels. Last but not least is B.P.R.D.: Hell on Earth-Monsters #1, which sees good ol' Liz Sherman dives into the trailer park for a good hillbilly brawl! At Image Comics, Spawn #209 lands in stores, as one of Image's longest-running series continues! Also look for the Jonathan Hickman-penned The Red Wing #1 as well as Guarding the Globe #5! Boom Studious sees Farscape #21 arrive in stores, as the war for the uncharted territories rages on in the pages of this epic! The hilarious Space Warped continues also in this second issue, the latest in the line of lampooning the Star Wars series. Over at IDW, 30 Days of Night Again #3 sinks its teeth into readers, as this four-part mini comes close to its conclusion! Also from IDW is G.I. Joe #168, as well as Duke Nukem Glorious Bastard #1, the first of a four-issue mini. Don't forget about Top Cow, which sees Artifacts #9 drop. The next chapter in the company's sweeping epic about powerful objects hidden throughout their universe! Wow, quite a list! Get out there and stimulate not only the economy, but your mind as well!!