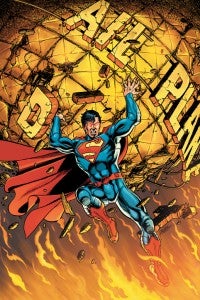 Purposely or not, the Superman family of titles in the new DC 52 have been some of the more attention-grabbing books, due to the great stories they are all currently telling, but also because of the behind-the-scenes mini-drama of creative team rotations, dissatisfaction among some, and other factors as well.  DC looks to give a clear path forward for one of their staple characters and his associates during today’s Superman panel.

On hand to address some of the questions that were on the minds of fans of the series, as well as give a sneak peek as to what’s in store, were some of the guiding hands of the character.  Group editor Matt Idelson joined Shane Davis of Superman: Earth One.  Rounding out the panel was Scott Lobdell, the man given the task of writing the flagship Superman title, and last but far from least, from Supergirl, Mike Johnson.

Superman: Earth One Volume Two was the first item up for discussion, and the differences between the two volumes were discussed. "You're going to see Clark with a feather in his cap for writing the article on Superman.  He's not arrogant, but he's feeling confident.  Volume Two will show a little bit of a different Clark Kent.  He's kind of goofy, grinning, and trying to be the Clark Kent persona.  The villain Parasite will be introduced in this book as well," said Davis.  He added that a new love interest would be there for Clark as well in this book.  He also promised some major battles with Parasite.  "There's a new twist with Parasite, in that he can drain power from the air and other things around him, not just people," said Davis.  He went on to explain, "The first battle is Superman thinking he's doing superhero stuff, throwing punches and such, but he can wear down, which is where Parasite can get him.  In choreographing those fights, it was interesting planning different stages of Superman with the different pieces of how he fights Parasite.  We get a lot more of his power and his responsibility with power in this arc."  This book will premiere during the first week of November, with over 100 pages for fans to enjoy!

Superman #0 will be the first issue for Lobdell with the series.  "I'm very excited about this, and so many times we've seen the final days of Krypton, and we often see the final ten minutes.  You don't get to see the relationship between the family of Jor-El, and we're going to show the development of that family and what happens when he learns the fate of Krypton until his baby is born."  Lobdell's official run begins with issue thirteen, and Lobdell commented on what he has in store. "I went after Superman in a way I haven't gone after other characters before.  I wrote an extensive note list on his relationships, his villains such as Toyman and the details about them.  I tried to keep that in mind with the new characters of the new 52.  I wanted to mix these existing characters with new ones in the context of the new 52.  I'm also concentrating a lot on Clark.  I think traditionally he's been seen as a bumbling guy with glasses, and suddenly Clark will be more like the voice for Superman in regards to issues that he thinks are important.  I want to make Clark a stronger person in a way, to merge them closer in personality."

Superboy is the next title up.  Idelson discussed the next phase of the character, "We want to show more of the history of Krypton, too, and what it means for Superboy and why Kara finds him so detestable as a clone". " We're going to be showing more of what clone is such a dirty word for those from Krypton, and why he's viewed as a cockroach to Kara.  Superman's opinion is more of the 'hey, let's give him a shot', so you're going to see more conflict between the Supers," added Lobdell.  The book is also beginning to explore the more moral complexity of the character of Superboy, with him not seeing any real harm in taking money from a bank.  "I spent a lot of time with Superboy, and I've written a lot about his character, but it's turning now to the action a bit more," said Lobdell.

Idelson went on to discuss Superman's first adventure in Action Comics #0.  "It wasn't easy for him out of the gate even though he had powers.  We learn things about Jimmy Olsen as well, things that I can't say yet!"  The fate of Krypto will be revealed as well, based on what the cover of Action Comics #13 teased. Issue thirteen is also the first step towards all four Super titles overlapping, with the five year difference gap being bridged with this issue.  Smallville Season 11 came up next, with a look at the cover of issue six.

Supergirl #0 shows the development of Kara's life on Krypton.  "The entire issue takes place there, and you're going to see how the different relationships she has with her mother versus her father will play out when they learn the fate of the planet," said Johnson.  A teaser image showed what was referred to as Kara's "Fort of Solitude".  "This is her opportunity and her place to honor and remember the world she left behind.  She's still not in full control of her powers, and here in her sanctum is a bit of a sensory depravation tank for her.  We're going for a different look rather than the ice palace of Superman.  Hers is a lot more colorful.  The villain coming up for that series will be a reimagined The Brain."

After this came the questions from the audience.  The first involved the use of Krypton in the zero issues.  "We're trying to put our own stamp on Krypton, and we want to make it a very alien world with lots of science fiction elements in it," said Johnson.  The next was a big question about the role of Stephanie Brown vs Barbara Gordon in Smallville Season 11.  "I can't confirm or deny that Barbara is replacing Stephanie," said the panel in various forms, but the answer was very elusive and cagy from the panel as a whole.  The fan persisted in discussing the ideas of artwork and images of Stephanie as Nightwing out there, but the panel remained vague. What about other upcoming Superman villains?  Lobdell said, "I'm not ruling anyone out at this time".  On Superboy, is the character going to be changing costumes any time in the future?  "I proposed a new character design for Superboy, and he is definitely getting a new costume in the future.  As Superman becomes less straight ahead iconic, I think what I would like to see is more variety for them."  Johnson said that "Supergirl's costume will get more development as to why it is so important to her.  More of it gets revealed."

The panel wound down with a few remaining questions about other characters in the Superman universe.  Steel might make more appearances, and the Eradicator is another character that is up for discussion, and the panel mentioned Cyborg appearing in the future.