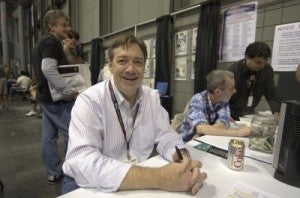 The announcement earlier today that Syfy has ordered a pilot script based on DC Comics character Booster Gold came as quite a surprise to many in the comics community. As tends to happen when news revolves around Booster Gold, I reached out to my old friend and frequent co-conspirator Dan Jurgens, who created the character 25 years ago and has written or drawn nearly every solo Booster Gold adventure since, to see what he thought about the possibility of a TV series based on the character he's become synonymous with over the years. Without a ton to go on (after all, the script isn't even written yet, let alone guaranteed to be picked up...although American Superstar reports that the show's format will be the one-hour drama formula that worked so well for Smallville), it was a quick chat but gave Dan a chance to tell us what he would do if he had to be the guy writing this pilot script and comparing the project to Booster's appearance on Smallville last year. It's hard not to call this interview a "Gold Exchange Extra," as I've done so many times before, but I'm trying to close that particular chapter of my career (which will be available in ebook form soon from the Barnes & Noble and Amazon websites) and move forward. ComicBook.com: So, how cool is it to have a character that you created--and that you're so closely associated with in many people's minds--headed to TV? Dan Jurgens: Well, it's certainly not there yet. But it's great to have Booster be considered and make it this far. ComicBook.com: Does it feel a little different getting this call than it did when you found out that Booster was going to be on Smallville? DJ: Yeah, though at least Booster on Smallville was a definite thing. This is still in the development stage and may, or may not, happen. At the same time, it's cool because Booster is standing on his own. Frankly, I think the concept can support it. ComicBook.com: What do you make of the fact that Superman's not going to be on TV anymore, but Booster Gold, Deadman and the Spectre will? DJ: Not much. Superman has a movie, after all! And he's obviously near and dear to my heart as well. [Editor's Note: Dan Jurgens takes over as co-writer (with Keith Giffen) and penciler on Superman in March. Read our interview with Dan about that here.] ComicBook.com: The description given to The Hollywood Reporter feels a bit more like the original Booster Gold run, playing down the time travel aspect outside of just the origin story and playing up the "saving today to ensure a better tomorrow" part. You've been pretty heavily invested in both volumes; what take would you run with if you had to submit a pilot script to Syfy? DJ: For a general audience, the pattern of Booster Gold Volume One probably fits best. The book that Geoff Johns, Jeff Katz and I did was a little more "inside baseball", if you will, keying on cool moments in DC's history. Plus, when you look at Booster's original concept, which is being both hero and fame whore, well, I think that seems even more tuned in with our world today than it did when I first created him. I think that tanslates quite well to TV. Geoff picked up on much of that with his script to Smallville-- dancing girls in every episode! Seems to me there's a great deal there to work with.