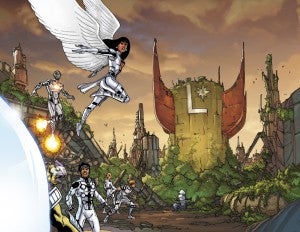 Superboy, the Teen Titans, Legion Lost and the rest of DC Comics' "Young Justice" titles will be coming out of this month's crossover event, The Culling, looking a lot different than they did when they launched last September. And now that the wait is almost over, DC is starting to aggressively tease what's coming next via their blog. "The Lost Legionnaires find their way home to the 31st century! And what they find is the worst thing that could ever happen! If you don't believe me, check out this exclusive art from the next issue!" series editor Brian Cunningham said in a story that ran earlier today, accompanied by the shot at left, taken from next month's Legion Lost #10 by Tom DeFalco and Pete Woods. The other titles affected by the fallout from the crossover have had pages teased online as well, with the exception of The Ravagers, the series designed to spin out of the events of the crossover. 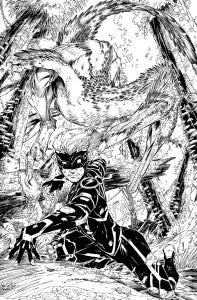 In another story that seems to have some time-travel element to it (or at least features its characters interacting with savage creatures that look prehistoric), Teen Titans #10 appears to have Kid Flash running from the missing link between dinosaurs and birds. "The teens find themselves thrust into a very unlikely (and awesome and mysterious) locale in issue #10 with no visible means of getting home, which will give them some time to reflect on what they've done. Red Robin, especially, will examine his own culpability in the Culling Affair, and what effect it will have on the continuation of the team as it currently stands," Editorial Director Bobbie Chase told the DC blog. "Kid Flash discovered something unusual – a mystery about his past, in the hands of someone from the 31st Century who seemed to know him! How does Timber Wolf know more about Bart than Bart knows about himself?" Personally, I'd love to see Bart join the Legion or Legion Lost--he seems wasted on Teen Titans but could give books like those a Justice League-related lift--but that's probably just fancy. And then, of course, there's Superboy. Another title that's facing a creative change in August (reportedly to make room in Scott Lobdell's schedule to take over Superman in September), it's clear from that dinosaur whose mouth he's in that Kon-El hasn't traveled too far from his Titans friends. Lobdell teams with Iban Coello and Scott Clark to craft an issue that sees Superboy and Wonder Girl thrown together in a strange land. 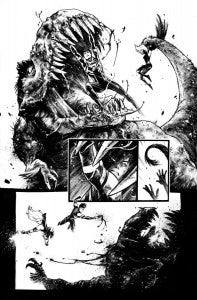 "After the Culling, literally everything's changed for Superboy," series editor Chris Conroy said. "He's spent his whole short life in the clutches of N.O.W.H.E.R.E., and now he's 'free' -- but where will he live? Who can he trust? And speaking of trust, who's even willing to trust him after the things he's done as N.O.W.H.E.R.E.'s living weapon? Wonder Girl sure isn't, as you'll see when the two of them wind up stranded on a mysterious island after making their escape from the Crucible!"

DC Comics Teases Life After The Culling for Young Justice