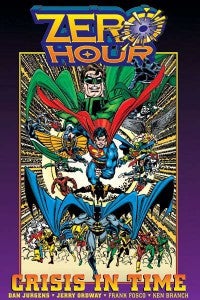 DC Comics has been promoting its 1990s crossover series Zero Hour on its social media sites today, with both the company's Facebook page and their Twitter feed promoting the series which, while usually difficult to find at a brick-and-mortar comic book store, is available for around ten bucks for the whole series on DC's digital comics storefront. Since comics news websites weren't really a thing in 1994, it seemed like this was as good an opportunity as any to talk to Zero Hour writer/artist Dan Jurgens, about to embark on a run on The Fury of Firestorm the Nuclear Men next month, about what it was like putting together one of these big, continuity-altering monsters back in the heyday of the '90s comics boom. I feel like the first line in your bio will always be that you created Doomsday and wrote Superman #75, but Zero Hour, especially at the time with Infinite Crisis and Final Crisis yet to happen, really was a pretty formidable assignment in its day, wasn't it? Yeah, true. It's one of those situations that you know will be tough and you know it will be a lot of work, but until you're in the middle of it, you just don't have any idea how much it can wear you down. Especially if you're writing AND drawing the book. It was a relentlessly pressurized few months. How'd you come by the gig? Was it just a question of Superman's popularity at the time? I thought it up! Actually, I had been talking with Mike Carlin about a project with those general broad strokes for a while. At the same time, my old pal KC Carlson, who was then an editor on staff, had some similar thoughts. So Mike put KC and I together and Zero Hour was the result. Of the characters who came out of Zero Hour, were there any you had a direct hand in creating? I mean, Guy Gardner: Warrior and Starman and the weird Fate monster all had their own series, so I've always assumed you were just asked to put them in the title. That's more or less true. As we developed the overall project, there was an absolute goal of launching a few new books. Beyond that, those characters are very much the work of the creators and editors in charge of those particular books. I was more involved with the overall project as well as some of the overhauls with the existing characters. Were there any of those you particularly liked? Starman was an absolute highlight, no doubt.

Speaking of characters who came out of Zero Hour: Whatever happened to Power Girl's baby? Hmmm... with 52 universes, maybe that means.... Zero Hour, like a lot of stuff that came out of the '90s, has had a pretty bad rap from some fans and critics in recent years for its, ahem, fashion choices. Those characters we mentioned earlier notwithstanding, what were some of the odder things you had to draw in this series? I think some of the costumes had gotten pretty odd by that point. We were in the midst of the armor/big shoulder pad phase. I thought Guy's armor was particularly painful to draw. You had a chance to revisit the story back when you and Johns (who wrote Infinite Crisis) were working on Booster Gold. Was it a bit trippy to go back into that scene, or was that just kind of part of Booster's stock-in-trade? No, having done it, it was definitely weird to go back and revisit some of the stuff. Whenever you do that, it's amazing what kind of memories can be dredged up. For example, to have six books that I wrote and drew (the five Zero Hour issues plus Superman #0) ship in one month was great. In and of itself, that was an achievement and the sales were fantastic. I remember that fondly. On the other hand, there was one unnamed person who did his best to drive me to homicide. Fortunately, he didn't succeed. The other thing I remember is being buried in paper. That was definitely pre-digital and pre-e-mail, so I had mountains of scripts and copies of books in production from the rest of the line in my office. I was running out of room to work and even trying to assimilate all of it so I could make sense of it and keep it straight was daunting. I know you really respect Marv Wolfman's work. How did it feel to be doing what really amounted to an unofficial sequel to his biggest, best-known work? You're right, I do respect Marv's accomplishments a great deal. I don't know that I consider Zero Hour a sequel, however. Crisis on Infinite Earths was a great achievement that stands alone. Did you ever feel like you had to walk the line of doing continuity "clean-up" without actually stepping on Crisis? No, not at all. In away, projects like that are necessary every few years. Comic universes can be a bit like a closet that you continue to throw stuff in. Every so often you have to open the door, take a deep breath and wade into it, deciding what to keep and what to discard. 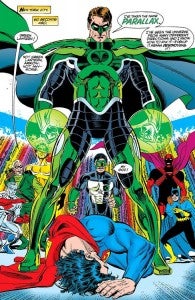 How did Hal Jordan become the central villain? Was that part of your original pitch, or was it a question of DC saying, "We need a place to put this guy."? The entire Green Lantern storyline was being developed around the same time. Anytime you're putting something like Zero Hour together you talk about a lot of ideas that never make print. In this case, we were discussing some various ideas about how to handle some of the Green Lantern stuff and the idea of using Parallax as the major villain emerged. I remember sitting in Carlin's office when we started going down that road and we called Kevin Dooley in, who was Green Lantern editor at the time. He immediately latched onto the idea and we continued to build from there. At the point when Zero Hour was being published, I don't feel like DC was having big annual events, were they? Not on that scale, if that's what you mean. That said, we'd gone from the Giffen-DeMatteis era on Justice League/Justice League International straight into your run on Justice League of America, and so it had been a while at that point since we'd seen all of DC's big guns assembled against one threat, hadn't it? Yeah, probably so. Things had gotten a bit fractured by that point. Although all the heroes did come together for Superman's funeral in the "Death of Superman" stories. You might have heard of it. With that in mind, was that why you wanted to get the time-displaced Hal into the story? It would have seemed a bit odd to see them all coming together without him. Exactly right. Any story of that magnitude has to have the universe's biggest characters one way or another. With Hal, the question really came down to whether or not we wanted to make him the villain. Based on where they were taking the character it was such a natural that it was, in my mind, a no-brainer. In hindsight, it seems as though this is one of your "early" time travel stories, but at the time, you'd already done Armageddon 2001 and Time and Time Again. This one was definitely bigger and more ambitious than those previous tales, so did it feel at the time like a culmination of something? It was the culmination of a lot of different thoughts and ideas. I don't know that I'd pin it down to time travel. Zero Hour was interesting in that it was a continuity-intensive story that nevertheless didn't retcon any of what came before it. Was that something that was important to you, or was it more a question of a DC edict? We made a conscious decision not to throw anything out the window, for the most part. We wanted to sand down a few rough edges here and there-- Hawkman being an example. And did that make the timeline coming out of Zero Hour (in this case, a literal timeline that you had to write and draw) a little more complex? That timeline was a tremendous amount of work! It required an overwhelming amount of back and forth-- how would it look? How would it work? Can we say this? Will that fit? But it was definitely worth it. That fans absolutely loved it and it provided great clarity and context to the DCU. I've mentioned more than a few times that we could use something like that again. I'm coming to you with all this because DC is promoting Zero Hour as a digital product on its social media sites today. Is it nice to see some of your older work reappearing in digital formats? Definitely-- especially the stuff that never had the chance to appear on better paper. Digital gives it a very different feel. As the direct market struggles to keep their head above water, do you think digital helps to keep material in circulation that's cost-prohibitive to keep in print and to merchandise on the shelves? It seems to me that's the ideal use of the format, and one that even retailers should be able to get behind. That's a question that is way, way beyond my level of expertise. I'm still a book guy. I love having some of these deluxe collected editions and would actually like to see more. I'm a sucker for slip cases and books with lots of "behind the scenes" tidbits. It's always fun to see those things arrive in the stores. It seems to me that we're all still looking for that balance between print and digital. It'll probably take a while to work itself out but I'd like to think there's a place for both.