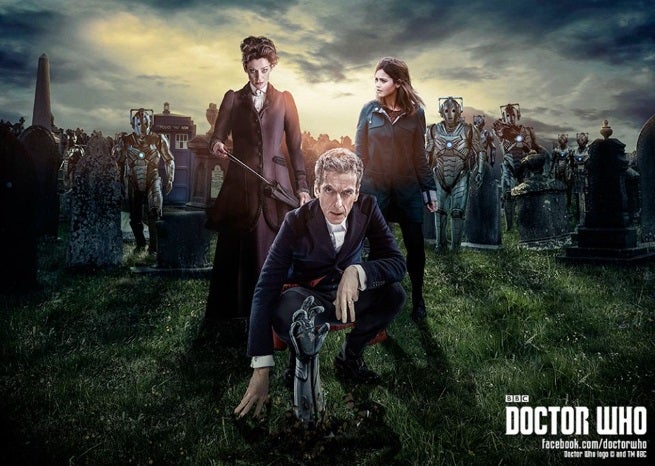 Picking up where “Dark Water” left off, a Cyerman find Clara. She tries to sway the Cyberman into ignoring her by pointing out that he doesn’t know who she is. The Cyberman scans her and identifies her as Clara Oswald. She says Clara Oswald is a disguise, she never existed, and she’s really the Doctor.

Outside, Missy is ringing the Cybermen outdoors, and the citizenry are treating them like fun novelties. She shows the Doctor that the Cyermen are “going viral” in cities around the world. Osgood arrives. The Doctor notes her bowtie, and she quips “bowties are cool” before pulling a gun on Missy. Kate Stewart arrives with armed group of UNIT soldiers who surround the Cybermen. The Cybermen take to the sky. There’s 91 of them. Kate asks how they were all hiding in the city, in that one building. The Doctor says it was bigger on the inside, Time Lord technology. The Cybermen seem to explode in a cloud of smoke, but Missy says they’re only pollinating.

Back in the “afterlife” of the Netherspehere, Seb and Danny Pink see the lights begin to go out. Seb explains that they’re actually in a data cloud and are about to be downloaded into the Cybermen. Back on Earth, Missy explains that they’ll all be downloaded within 24 hours. The Doctor starts to demand and explanation from Missy, but UNIT tranquilizes them both. Osgood tells the Doctor he just has to let them take him, but he pulls her close and speaks into her ear. Osgood tells Kate that he said to guard the graveyard. The cloud left by the Cybermen spreads out over a graveyard and starts to rain. The water runs off into the sewer and travels through drainpipes, into a funeral home. The mortician is listening to the radio, and hears similar events taking pale around the world. He notices the morgue has standing water. The bodies in his morgue start to turn, and one becomes a Cyberman and rises.

Clara is recounting the Doctor’s history to the Cybermen to prove that she’s the Doctor. They’re still skeptical. One of the Cybermen stuns Clara and takes out the other Cybermen. The morgue papers reveal him as Danny Pink, not under Cyber-control.

Missy explains that by saving Gallifrey, the Doctor saved the Master. Missy also hints that she knows where Gallifrey is, but won’t tell. Though the Doctor plays coy, Osgood quickly figures out who Missy is. She also suggest that they should be looking up at the clouds rather than down at the graveyards.

Clara walks through a graveyard, catching a Cyberman out of the corner of her eye. Cybermen begin to rise up out of the graves.

The Doctor, Kate, and Ahmed are assessing the global damage. He explains that all it takes is for the Cybermen’s substance to touch human flesh to convert them to Cybermen. He realizes that Missy was preying on the paranoia and fear of death of the rich to help build a new army of Cybermen able to convert the dead.

Clara sees the entire graveyard beginning to rise as Cybermen.

The Doctor reveals that Missy must have been recruiting the minds of the dying for as long humanity has had a concept of the afterlife, using her own TARDIS.

Missy tells Osgood she has something important to tell her, a secret that she has to whisper. Osgood walks over and Missy whispers that she’s going to kill her in a moment. Osgood goes back to work, but Missy starts counting down. Missy asks what’s in Osgood‘s pocket. Osgood is surprised to find Missy’ handcuffs in her pocket. Missy kills the guards and Osgood. Missy it’s the button on a device that begins to mess with the plane.

The Doctor notices that the clouds are still there and wonders what the Cybermen still have left. Cybermen are tailing the plane and the Doctor realizes that Missy has escaped.

Clara is still among the graves and the Cybermen. She notices one staring at her. It turns away. She knows it’s the one that brought her there. He says he knows she’s not the Doctor. He asks where the Doctor is. She goes on about how she’s the Doctor’s best friend, that he’s the only man she would always forgive, always trust, and never lie to. The Cyberman raises its gun, then lowers it and takes off his face to reveal Danny underneath. He says Danny is dead and asks for help. He asks her to run on his emotion inhibitor.

The Cybermen begin pulling apart the plane. Missy teases the Doctor to ask her what her plan is. She says she has a gift for him, that she’s been up and down his timeline meeting the people who died keeping him alive. The phone on the TARDIS rings and Missy says it’s Clara. She reveals that she gave Clara the Doctor’s number in the first place, and placed the ad in the paper that kept them together.

Clara tells the Doctor about Danny. A Cyberman breaks in the plane. The Doctor tells Clara that if she stops Danny’s pain, he’ll kill her. She hangs up on him. Kate finds the Doctor and tells him about the Cybermen getting in the plane. Missy blows out the side of the plane and Kate falls out. Missy teleports out. The plane explodes. The Doctor is falling, and Seb and Missy are watching remotely. The Doctor calls for the Tardis and begins falling toward it, key in hand. Seb squees, and Missy deletes him. The Doctor lands in the TARDIS.

The Doctor arrives in the graveyard with Danny and Clara. The Doctor explains what will happen if she goes through removing Danny’s emotions. Danny insists he won’t harm her. The Doctor explains his history, briefly, with the Master, and that his emotion is what makes him different from the Master. The clouds begin reforming. The Doctor want Danny to tap into the Cybermen hive mind and tell him the plan. Danny says he’ll need to turn on the inhibitor for him to see the plan clearly. The Doctor is taken back by choice of his own morality vs. the tactical advantage. Clara tells him to give her the screwdriver. Danny calls the Doctor a typical officer, keeping his hands clean. The Doctor walks away. Clara and Danny tell each other they love one another. Clara struggles to bring herself to do it. She finally uses the screwdriver and then runs to hug Danny. Danny tells the Doctor that the clouds will rain again, killing all of humanity only for them to rise again as Cybermen.

Missy floats into the graveyard, Mary Poppins style. Missy explains that she’s raised an army, and then gives it to the Doctor as a birthday present. She needs the Doctor to realize that they’re alike so that they can be friends again. The Doctor wrestles with the responsibility, then realizes that he’s just an idiot with a box, not a hero, or an officer, and that love will triumph. He tosses the Cybermen controller to Danny pink, who puts it on, rallies the other Cybermen, and leads them to sacrifice themselves burning up the clouds overheads.

Missy rattles off some coordinates. She says it’s where Gallifrey is, back at its original location. Clara demands that the Doctor kills Missy, or every death she causes is on his head. Missy tells the Doctor to say something nice. He says “you win.” He aims the device, but a Cyberman blasts Missy first. The Cyberman points the Doctor to Kate, still alive, lying on the ground. She says something about her father, and the Doctor realizes that’s who the Cyberman is, that he must have saved Kate. They salute, and the Cyberman leaves.

Two weeks later, Clara is sleeping in her bed. She hears someone whispering her name. She believes its Danny, and she walks into the hall. A light shines in the hallway, and Danny speaks through it. The bracelet that controlled the army can allow one person to travel back from the afterlife. Clara begs Danny to make the trip, but he sends the young boy he killed instead.

Clara meets the Doctor. The Doctor thinks Danny came back. Clara says she’s got bad news. The Doctor assumes Danny is back, they’re together, and that means he’s out of the picture. Clara says that’s not quite true, but the Doctor says he found Gallifrey at the coordinates Missy gave him. When the Doctor went to see it, he became angry and began smashing the TARDIS console.

The Doctor tells Clara he’s going home, to help make Gallifrey a good place, that he’ll never steal a TARDIS and run away again. Clara lies and tells the Doctor that she and Danny will be fine. Since its goodbye, the Doctor allows Clara a hug. Clara asks why he doesn’t like hugging. He says never to trust a hug, it’s just a way to hide your face. They both seem on the edge of crying. As the Doctor goes back to the TARDIS, Clara tells him travelling with him made her feel really special. She thanks him, and he returns the thanks. The Doctor leaves.

The credits are interrupted by a knock at the TARDIS door. A voice says it can’t end like that, that neither he nor Clara are all right. The door opens and some snow comes in. Santa Claus stands there and asks the Doctor what he wants for Christmas.

Doctor Who Series 8 Finale: Death In Heaven Recap With Spoilers