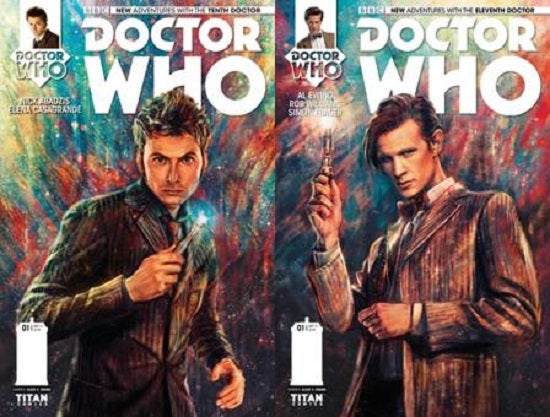 Titan Comics have released their solicitation text for titles shipping to the U.S. direct market in July, including more details on the first issues of Doctor Who: The Tenth Doctor #1 and Doctor Who: The Eleventh Doctor #1. You can see the full solicitation text embedded below and the standard covers above. This will be the first time we've seen new Doctor Who comics in more than six months, as IDW's license on the property expired in December 2013. 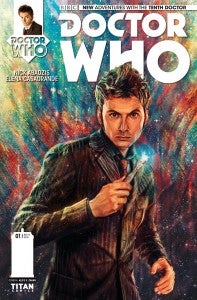 DOCTOR WHO: THE TENTH DOCTOR #1 Nick Abadzis & Elena Casagrande | 32pp | FC | $3.99 | On-sale July 30 THE TENTH DOCTOR IS BACK, IN AN ALL-NEW ONGOING SERIES! NEW COMPANION! NEW FOES! UNFORGETTABLE NEW HORIZONS! ALLONS-Y! The Eisner Award-winning Nick Abadzis (Laika) and fan-favorite Elena Casagrande (Angel, Suicide Risk, Doctor Who, Star Trek) take control of the TARDIS for their first five-issue arc with the Tenth Doctor, as played by David Tennant! Gabriella Gonzalez is stuck in a dead-end job in her family's New York Laundromat, dreaming of college and bigger, better and brighter things. So when a strange man with an even stranger big blue box barges into her life on the eve of the Day of the Dead celebrations – talking about an infestation of psychic aliens – she seizes her chance for adventure with both hands. After Donna's tragic exit, the Doctor thought he was done with new companions. But Gabby Gonzalez is going to prove him wrong… if she survives the night! Please note: unfortunately, this title is not currently available to order in the UK and Eire. AVAILABLE TO ORDER NOW FROM APRIL PREVIEWS Order code: APR141372 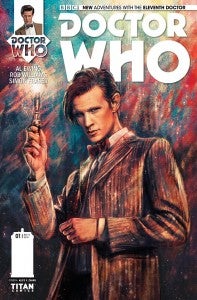 DOCTOR WHO: THE ELEVENTH DOCTOR #1 Al Ewing, Rob Williams & Simon Fraser | 32pp | FC | $3.99 | On-sale July 30 THE ELEVENTH DOCTOR RETURNS IN AN ALL-NEW ONGOING SERIES, WITH A TIME-TWISTING LEAP INTO THE UNKNOWN! GERONIMO! A stunning new era begins for the Eleventh Doctor, as played by Matt Smith! Alice Obiefune has just lost her mother when the Doctor explodes into her life. But what does this grieving young woman have to do with the career of a 70s musician, an amnesiac alien, and a terrifying cosmic threat? In the wake of the second Big Bang, find out what the Doctor gets up to when Amy and Rory aren't around! Series architects Al Ewing (Doctor Who, Loki: Agent of Asgard, Mighty Avengers, Trifecta) and Rob Williams (Revolutionary War, Ordinary, Miss Fury, The Royals: Masters of War, Trifecta) kick off a whirlwind adventure through eternity with artist Simon Fraser (Nikolai Dante, Grindhouse, Doctor Who)! Please note: unfortunately, this title is not currently available to order in the UK and Eire. AVAILABLE TO ORDER NOW FROM APRIL PREVIEWS Order code: APR141379

Doctor Who: The Tenth Doctor and The Eleventh Doctor Comic Details Surface