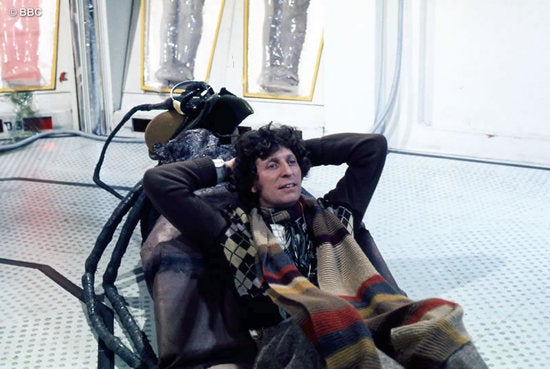 With David Tennant, John Hurt and Matt Smith teaming up as The Doctor Triple Threat in the forthcoming fiftieth anniversary episode of Doctor Who titled "Day of the Doctor" (a web-based prelude to which saw Paul McGann appear as The Eighth Doctor), a fourth veteran of the esteemed British sci-fi series now claims that he'll appear in the episode, as well. "I am in the special," Baker told The Huffington Post in an interview. "I'm not supposed to tell you that, but I tell you that very willingly and specifically; the BBC told me not to tell anybody but I'm telling you straightaway." Whether he may be trying to mislead the audience is up for anyone to guess, given the somewhat confrontational way he phrased it. Could he be appearing only in archival footage? In flashback or an alternate reality? And is this in any way tied to the teasers The BBC released some time back in which Baker was prominently featured? A representative from the BBC declined to confirm, saying, "As with William Hartnell's recent appearance in the last season finale, anything is possible in Doctor Who. But nothing is certain." The Zygons, villains first introduced during Baker's time as The Doctor, will be featured in "Day of the Doctor." The time-travel nature of the story, of course, allows for almost anyone to make a brief appearance in the right situation, and it's been implied that there may be an explanation forthcoming as to how Peter Capaldi--who will play The Doctor beginning in 2014--has previously appeared as human characters in the established Who universe.

Doctor Who: Tom Baker Claims He's in Day of the Doctor