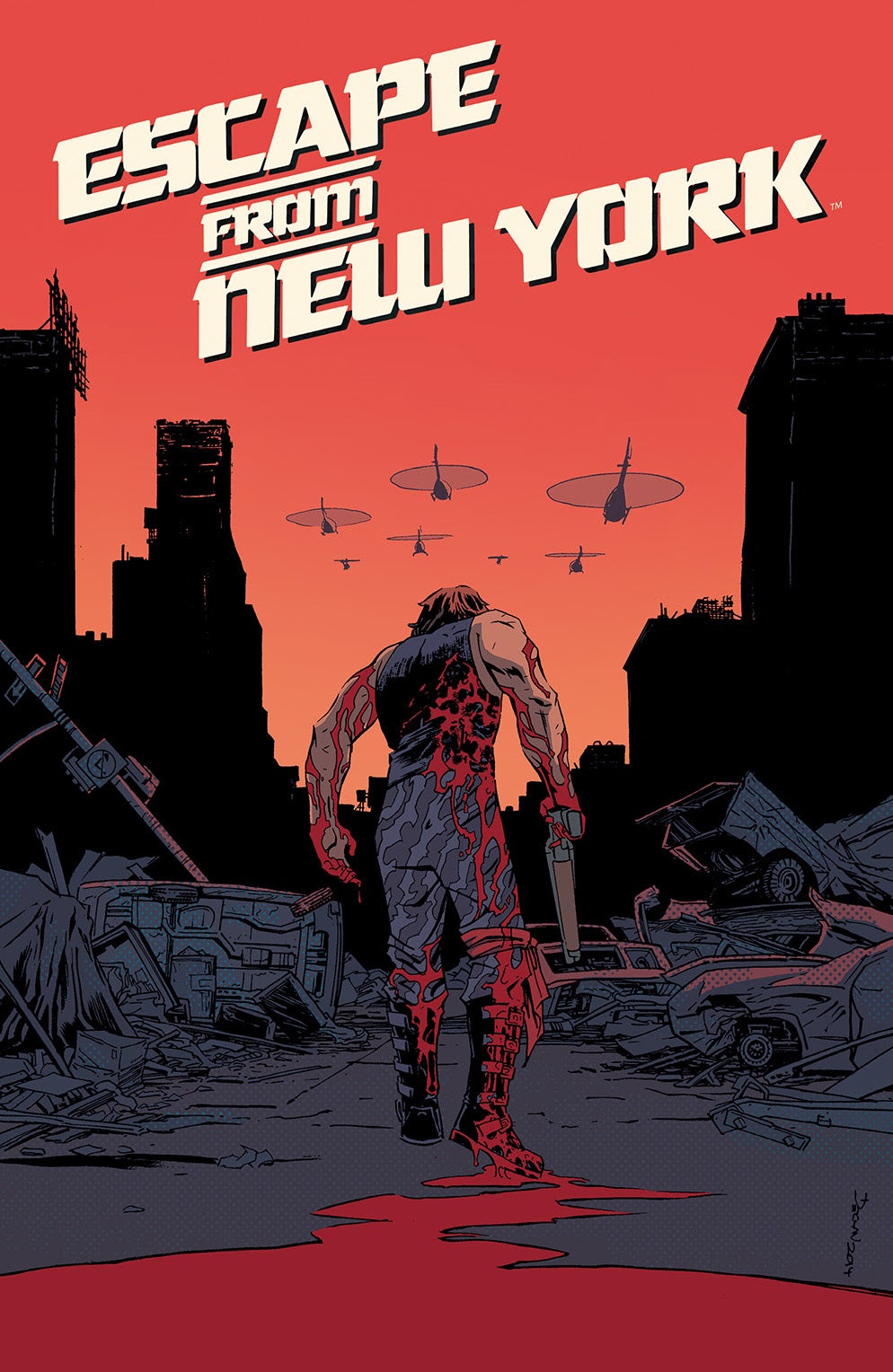 Escape From New York #1 picks up directly where the movie left off, playing out the final moments of the film in its very first page. That introduction is not used to create a spin-off that is slavishly devoted to the source material, but one that is ready to springboard from it into something new instead. After Snake Plissken destroys the President's speech, everything that comes next is unexpected. Together Christopher Sebela and Diego Barreto make a strong case for why this series ought to be read by new and old fans alike.

They use the first issue to define the world beyond the prison island of Manhattan. John Carpenter created a semi-apocalyptic future in Escape From New York, but left most of the world unexplored. This story opts to put Snake in motion and not give him a chance to stop until the very last page. It is an opportunity to explore the East Coast of this alternate United States, specifically what has happened to Florida, and the state of the world after the President's disastrous speech. This is all far more interesting fare than returning to an island for another escape (like the title might imply).

The issues is really about Snake and he's the reason it is effective, more so than any new exploration of the world. Kurt Russell's performance as the super macho, extra deadly, and hyper competent Snake Plissken is the continuing draw and heart of the source material. Without his attitude, it would be impossible to make this comic functio; it's there in every disinterested sneer and shrug. Everything he does has the indescribable quality of feeling right. He treats showdowns with cop cars and helicopters like it's just another day and dismisses anything and anyone that doesn't interest him. Sebela's one liners hit a tone that has only been captured in Kyle Stark's Sexcastle recently. One thing is clear: Snake is back.

Barreto's style matches the story's tone well. It's all hard lines and fast pacing. He crafts some excellent establishing shots throughout the issue. One instance revealing a gas station holdup gone wrong blends menace with minor tragedy in a perfect mix. Barreto runs into trouble when composing action sequences though.

The opening chase sequence wherein Snake commandeers a helicopter to battle others in the sky devolves quickly into confusion. A mix of close up panels and lack of identifying markers and establishing shots renders two pages to be a jumble of images. It's not clear what has occurred in the battle until Snake is shown crawling from the wreckage of one helicopter. All of the necessary components of the battle are there (helicopters, pilots, missiles), but they are not assembled in a coherent manner.

Later sequences are not a marked improvement. They are more readable, but often bury pertinent details in a single panel and fail to emphasize the direction and effects of the action. Barreto's work in these sequences is workmanlike at best.

Escape From New York #1 is a strong continuation of the movie it springs from in style and tone. Sebela and Barreto express a clear love for the source material, and are interested in growing a new story from the fertile soil of John Carpenter's original movie. The confusing action sequences create problems and will need to be addressed, but this issue still manages to debut on a positive note.