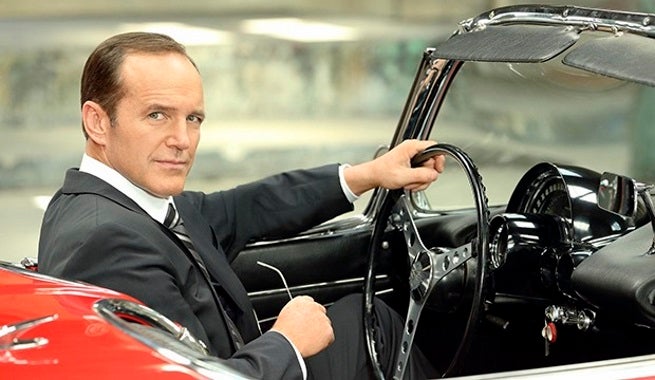 Agents of S.H.I.E.L.D. is quickly approaching the end of its second season, with tonight's episode, "Scars," being the last before the two-hour season finale. The season has been full of twists and turns, with Coulson's team having to fend of the threat of Hydra, a coup by Robert Gonzales and his "real" S.H.I.E.L.D., and deal with the unearthing of an alien civilization hidden from Earth's history.

That's a lot to handle, especially for the man at the top. Ahead of tonight's episode, ComicBook.com spoke to Clark Gregg, Agents of S.H.I.E.L.D.'s own Director Phil Coulson, about S.H.I.E.L.D., Hydra, Inhumans, Marvel's Netflix series, Phase 3 plans and more.

Enjoy our full interview below, and check back for some final, spoiler-filled comments from Gregg after Agents of S.H.I.E.L.D. airs tonight at 9 p.m. on ABC.

With the existence of the Inhumans now exposed, is there any possibility left for there to be a happy ending? Can the Inhumans and S.H.I.E.L.D. possibly peacefully coexist at this point?

It's set up in a way at this point where it's hard to imagine anything but full-scale war between S.H.I.E.L.D. and the Inhumans. It's something that's kind of hinted at in some of the stuff that Lincoln says about the fanatical dedication to secrecy that the Inhumans have, that certainly makes sense to anyone whose familiar with the Inhumans of the comic book world, who had hidden their existence from humans for many years.

We know that one of Marvel's favorite sayings is, "it's all connected." With an Inhumans movie on the horizon, how is this conflict between the Inhumans and S.H.I.E.L.D. a possible foreshadowing or prologue to the movie?

I wish anyone told me anything that would let me have an educated answer to that. It certainly looks that way to a Marvel fan like me. All I really know about is the more pressing issue of this particular opening skirmish, because that hits Coulson where he lives, because suddenly one of the people who matters most to him on the planet has kind of got one foot in both worlds in that Skye is a S.H.I.E.L.D. agent, to some extent, still and at the same time she's an Inhuman.

I like what the writers have done this year in that Coulson has really been torn between the two halfs of himself, one that's a really pragmatic, dedicated and, if necessary, ruthless S.H.I.E.L.D. agent, and the other one, who's kind of got a different kind of respect for the sanctity of life, in the wake of having been resurrected from the dead, and the connection he then formed with his new team. That gives him a unique perspective going forward, which will hopefully keep this from becoming the kind of all out conflagration that would cost a lot of S.H.I.E.L.D. agents and Inhumans their lives, but it could go either way.

Speaking of conflict, after the events of the last episode and Avengers: Age of Ultron, where does Coulson and his S.H.I.E.L.D. stand in relationship to Gonzales and his "real" S.H.I.E.L.D.? Are they able to unify and make amends, or is there still a kind of bitterness and distrust they have to work through?

Clearly he and Gonzales have different managerial styles and, it seems, kind of core philosophies in the wake of the Battle of New York that aren't going to go away anytime soon. With Gonzales gone, it feels like Coulson is the de factor head of S.H.I.E.L.D., but the one thing we've seen from Coulson this year is the willingness to respect certain alliances, no matter how unsavory, including Ward. It kind of touches on this new, more humanistic side to Coulson that seems to kind consider people's viewpoints, either the ones he's in conflict with or the ones he's attempting to align with, no matter how opposed it might be to his own.

Hydra was a huge threat in Season 1, and was significant in the first half of Season 2. Now, in the wake of Age of Ultron, does Coulson feel like that threat has passed and that he can move onto the next thing?

You know, from early on in Agents of S.H.I.E.L.D. we established this pretty vast network of Hydra assets out there, underground, and I don't think Coulson's ever going to turn his back on them, but the more pressing threat seems to be the Inhumans at this moment.

Age of Ultron was the finale of the Marvel Cinematic Universe's Phase 2, and opens the door on Phase 3. How do you see the role of S.H.I.E.L.D. as an organization, and Agents of S.H.I.E.L.D.as a show, changing as we begin moving towards Infinity War?

If you've ever read any of the Civil War comics, you'll know that S.H.I.E.L.D. is very much part of a group that's trying to register the superheroes, and that really divides and forces some S.H.I.E.L.D. agents – especially those with connections to people who have powers that can feel personal – to really decide which side of that conflict they're on. Iron Man and Cap end up on, in the comics anyway, on opposite sides of it. There's always changes in the way they do that in the cinematic universe. I think, with the S.H.I.E.L.D. 2.0, you're seeing some of the first ripples of that different points of view on what S.H.I.E.L.D. should be when it's rebuilt. I'm very, very curious to know which side Coulson will end up on in that struggle.

Do you think there's a possibility that S.H.I.E.L.D.'s Index may be analogous to the Superhuman Registration Act database from the comics, or perhaps morph into the cinematic universe version of that?

If it isn't what it becomes, it's certainly going to be one of the main bibliography notes, you know what I mean? If Coulson sees a thing that he's been so instrumental in using and building in order to keep track of people with powers, if he sees that being used to persecute people he cares about, it's going to cause a real crisis of faith.

Spoiler Warning for Avengers: Age of Ultron in the next question.

Age of Ultron featured a heroic death, which is something I'm sure you know a little bit about after the first Avengers movie. Is it possible that the idea of sending Quicksilver on a little vacation to T.A.H.I.T.I. has crossed Coulson's mind? Considering the conversation he had with Ward a couple fo episodes ago, it seems he still has access to that technology.

Well, there's two components of it, it can be a little confusing. There's the part of the T.A.H.I.T.I. protocol that erases people's memories, and there's the other part, which is the part of the T.A.H.I.T.I. protocols that was designed to, according to Nick Fury at the end of Season 1 of our show, was designed to be kind of a last resort, emergency method that you could use to bring people back who had died. The problem with it, as we saw in the episodes that had flashbacks this year, is that most of the regular agents that they experimented on lost their minds in the same way that Coulson started to. So it was a very risky project that Coulson himself, before he had that memory erased, advised strongly against ever using again. It will be interesting to see if Quicksilver's brought back that way. There's certainly a grand tradition, in the comics, of people finding their way back from the Underworld, and I am a happy beneficiary of that tradition.

Have you heard any hints about possible crossover between Agents of S.H.I.E.L.D. and Mavel's Netflix programs? Is that something that you'd like to see, or do you think that the very different tones between the ABC programs and what we've seen in Daredevil makes them better left in their own worlds?

You know, I'm loving watching Daredevil. I can't wait to see Jessica Jones. Luke Cage was a favorite of mine when I was a kid. I'm thrilled to see what they're doing on Netflix. Our show is in a very different world that has its own special place, but the great thing about this world is, I you thought you were going to be able to put Thor on the same screen with Tony Stark and Natasha Romanoff and really have it feel like the same thing. The short answer is I never say never anymore, because once you've got the talking raccoon with a machine gun you've proven that you can do anything.

Any last messages you want to send to the Agents of S.H.I.E.L.D.fans out there?

It's been an amazing year for us, and there's been an amazing amount of support from the fans and from your site, and other sites, about the stuff we've been trying on the show, a lot of which is really risky on paper. It's really kind of meant the world to everyone involved to really feel that support and it kind of got us through the real exhaustion of the kind of shot that we do.