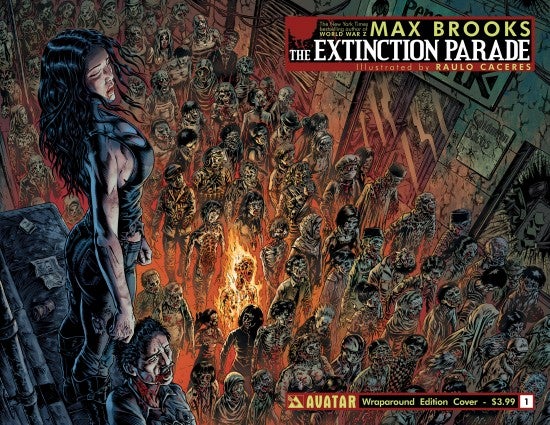 Legendary TV have optioned Max Brooks's Extinction Parade, Deadline reports. Brooks, whose novel World War Z just became a major theatrical hit that bore almost no resemblance to the source material, will assist in development of the project and pen the pilot episode, Brooks and Avatar Press said. "I only brought the idea to one company, Legendary, because they do the kind of quality work of which any writer would be proud." said Brooks. "Max Brooks is a visionary with an incredible ability to tell stories that deliver a fresh approach to the horrors that haunt our nightmares. His work on Extinction Parade has been a stunningly rich tapestry of cultures in decline and a biting indictment of the perils of privilege. It will make the perfect television series to appeal to fans who have until now settled for thinly veiled soap operas parading as horror," said William Christensen, Publisher of Avatar Press. The project deals with a zombie apocalypse, which brings humanity to the brink of extinction and by extension cuts off the food supply for legions of immortal vampires who have been living secretly among us for years. "I'm trying to tell the story of a species confronted with its own demise, a species that previously believed it was more or less invincible," Brooks said in an interview with ComicBook.com. "In The Extinction Parade, I wanted to explore the dangers that come with perceived privilege; the arrogance, the ignorance, the complete inexperience with struggle. Here is a species that always believed itself to be at the top of the food chain and therefore never developed the kind of coping mechanisms we as 'weaker' humans were forced to adopt. Here's a species that suddenly has confront the fact that all their supposed strengths might actually be fatal weaknesses."