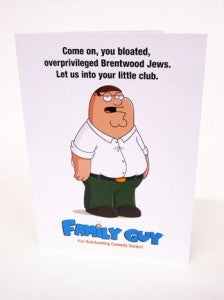 , of course, offends a lot of people on a pretty regular basis. it's something of their stock-in-trade, and generally preople take it as read that their sexist, racist and homophobic jokes are tongue-in-cheek, knowing that the show's creator, Seth MacFarlane, doesn't really believe anything of the sort.

This week, though, The Hollywood Reporter is carrying a story that indicates a recent mailer they sent to Emmy voters urging them for support may have offended some of the TV industry insiders it was targeting.

The flier--which on the outside features Peter Griffin saying, "Come on, you bloated, overprivileged Brentwood Jews. Let us into your little club," and then on the inside (along with a DVD featuring episodes for consideration) has Stewie Griffin telling voters, "It's a secret ballot. You can still tell people you voted for Modern Family."--has apparently got producers divided, according to the THR report.

One producer tells the magazine, "While I think Family Guy is a genuinely funny show, we all -- including this 'Brentwood Jew' -- need to think twice about this kind of humor. Stereotyping any particular ethnic group is just not cool and can lead others (with the wrong intentions) to feel a certain license to take shots. Surely Seth [MacFarlane] has better stuff than this."

Meanwhile, another disagrees on both counts; this one actually enjoyed the campaign, but still won't be voting for Family Guy. "Wow," they quote the producer as saying, "if Family Guy was that funny on a regular basis, it might get nominated."

The ad was reportedly rejected by not only The Hollywood Reporter, but also Variety and other entertainment-industry periodicals before FOX elected to send it directly to voters.